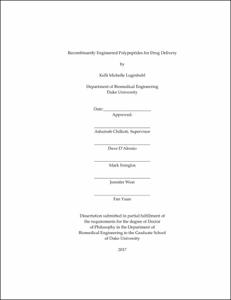 Novel drug delivery methods aims to improve the therapeutic efficacy by enhancing the molecule’s pharmacokinetic profile as well as increasing its accumulation at the target size while reducing the amount at off-target sites. The results of effective drug delivery can be economical – reducing the amount of wasted drug – as well as therapeutic, by minimizing side effects and simplifying dosing regimens. While most methods achieve first-order release at best, zero-order release is the ultimate goal of controlled release systems, wherein the drug is released at a constant rate that is independent of concentration. Towards this end, we have developed a system that achieves near zero-order release kinetics for the delivery of glucagon-like peptide-1 (GLP-1) for the treatment of type 2 diabetes. GLP-1’s activity is glucose dependent, potentiating insulin release only when glucose levels are high. Thus, although type 2 diabetes is a complicated chronic condition to treat, maintaining constant levels of GLP-1 in circulation at all times would ensure that insulin is released only when the body needs it.

We have achieved impressive delivery of this peptide, which stands up to other FDA approved formulations, by recombinant fusion to an elastin-like polypeptide (ELP). The ELP, a thermally sensitive biopolymer, was engineered to undergo a soluble to insoluble phase transition upon injection to form a slowly releasing drug depot. By optimizing the biopolymer’s tunable parameters – molecular weight and transition temperature (Tt) – we were able to demonstrate circulation times of up to 10 days in mice and 17 days in monkeys. The optimized pharmacokinetics, showing near zero-order kinetics, leads to 10 days of glycemic control in three different mouse models of diabetes, as well as to reduction of glycosylated hemoglobin levels and weight gain in ob/ob mice treated once weekly for 8 weeks. Furthermore, we saw no obvious injection site reactions in mice and low immunogenicity in monkeys. The fusion had equivalent if not superior performance compared to clinically used formulations of this drug class, Bydureon and Trulicity, which are both FDA approved for once-weekly injection. Thus, this optimized GLP1 formulation has the potential to enhance therapeutic outcomes by eliminating peak-and-valley pharmacokinetics and by improving overall safety and tolerability.

We have also begun the design and synthesis of next-generation injectable depots. Using molecular and synthetic biology tools, we are developing a unimolecular dual incretin, that would display GLP-1 and its sister peptide, glucose-dependent insulinotropic peptide (GIP) on the same molecule. Like GLP-1, GIP is also released post-prandially to augment insulin secretion upon binding its receptor on the pancreatic β-cell. We hypothesize that a unimolecular dual agonist will have synergistic effects in vivo due to avidity enhanced by its bivalency, but also due to the crosslinking of receptors and potential changes in downstream signaling bias. We have successfully synthesized a unimolecular dual agonist by expressing individual fusions (GLP1-ELP and GIP-ELP) that bear the substrate sequence for Sortase A, a bacterial enzyme that can perform site-specific native peptide ligation of the substrate sequence and a chemically modified oligoglycine, which acts as a nucleophile. Using Sortase A, we can functionalize each fusions with a bioorthogonal azide group and then link the two peptides with a homobifunctional crosslinker. While in vitro testing of the molecule is in preliminary stages, the design principles that we have established for injectable depots, combined with the methods for synthesizing a unimolecular dual agonist, should be broadly applicable for improving the pharmacological performance of a number of peptide and protein therapeutics.