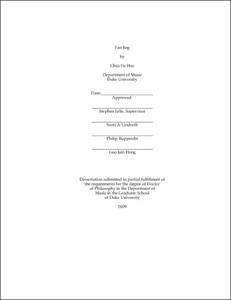 Fan Jing (Folk Images), an orchestral trilogy, is based on folk elements of the three main ethnic groups in Taiwan: Min-nan, Hakka and aboriginal. As each of these groups has its own spoken language, folk music and musical style, each movement of the trilogy has its own character. Furthermore, different aspects of folk elements are foregrounded in each movement. The first movement, Fantasy on Wang Bao Chuan, emphasizes Min-nan vocal music and is mainly based on the Taiwanese opera melody , Wang Bao Chuan. Melodic figures derived from the opera mix with original melodies. These melodies depict the tender quality of Min-nan vocal music with its characteristic bending pitches. By contrast, Hakka music, famous for its "mountain songs" which farmers sing to each other while picking tea leaves, is usually sung in a more unadorned manner. In this second movement of Fan Jing, the open and spacious atmosphere of mountain songs is evoked; in its harmonic sphere, minor triads, ubiquitous in the original melody, are juxtaposed with pentatonic chords. The elements in the third movement, Feng Nian Ji, are derived from the opening phrases of a harvest song of the Amis, an aboriginal tribe located mainly in the eastern Taiwan. The structure of this movement follows the events occurring during the harvest festival (&#35920;&#24180;&#31085;), including hunting, singing in the antiphonal style ("call and response"), dancing, and celebrating communally. The music evokes the mood of this wild carnival.

On a theoretical level, Fan Jing loosely adapts Chinese musical elements to concepts of twelve tone tonality and set theory. This approach builds on the work of Chinese composer, Chen Yi. In this work and related music, the composer has developed an idiom which is capable of giving voice to Chinese thematic elements and which employs western developmental techniques.