A Framework for Dissecting and Applying Bacterial Antibiotic Responses 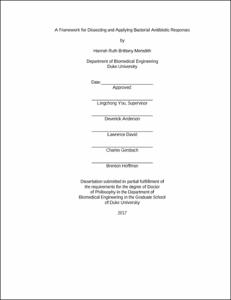 An essential property of microbial communities is the ability to survive a disturbance. This is readily observed in bacteria, which have developed the ability to survive every antibiotic treatment at an alarming rate, considering the timescale at which new antibiotics are developed. Thus, there is a critical need to use antibiotics more effectively, extend the shelf life of existing antibiotics and minimize their side effects. This requires understanding the mechanisms underlying bacterial drug responses. Past studies have focused on survival in the presence of antibiotics by individual cells, such as genetic mutants. Also important, however, is the fact that a population of bacterial cells can collectively survive antibiotic treatments lethal to individual cells. This tolerance can arise by diverse mechanisms, including resistance-conferring enzyme production, titration-mediated bistable growth inhibition, swarming and interpopulation interactions. These strategies can enable rapid population recovery after antibiotic treatment and provide a time window during which otherwise susceptible bacteria can acquire inheritable genetic resistance.

To further explore bacterial antibiotic responses, I focused on bacteria producing β-lactamase, an enzyme that has drastically limited the use of our most commonly prescribed antibiotics: β-lactams. Through the characterization of clinical isolates and a computational model, my Ph.D. thesis has three implications:

First, survival can be achieved through resistance, the ability to absorb effects of a disturbance without a significant change, or resilience, the ability to recover after being perturbed by a disturbance. Current practices for determining the antibiotic sensitivity of bacteria do not characterize a population as resistant and/or resilient, they only report whether the bacteria can survive the antibiotic exposure. As resistance and resilience often depend on different attributes, distinguishing between these two modes of survival could inform treatment strategies. These concepts have long been applied to the analysis of ecological systems, though their interpretations are often subject to debate. This framework readily lends itself to the dissection of the bacterial response to antibiotic treatment, where both terms can be unambiguously defined.

And finally, understanding the temporal dynamics of an antibiotic response could guide the design of a dosing protocol to optimize treatment efficiency for any antibiotic-pathogen combination. Ultimately, optimized dosing protocols could allow reintroduction of a repertoire of first-line antibiotics with improved treatment outcomes and preserve last-resort antibiotics.