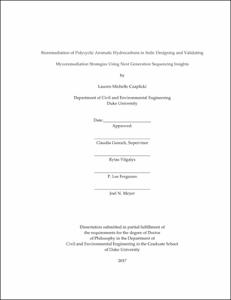 This dissertation presents a framework to improve bioremediation of soils polluted with polycyclic aromatic hydrocarbons (PAHs). PAHs are of great concern because they are recalcitrant and toxic. PAHs enter the environment from a variety of sources such as incomplete combustion and coal tar distillation. The PAHs focused on in this dissertation have polluted soils as a result of creosote-based wood treatment operations that took place at Holcomb Creosote and Atlantic Wood Industries, Inc. (AWI) both of which are now classified as Superfund sites. There are numerous sites analogous to these two Superfund sites throughout the world which have been polluted through similar wood-treatment operations, as creosote was once industry’s foremost wood preservative.

There is room for existing PAH treatment options, which are mainly physical and chemical in nature, to be expanded to include more sustainable options. Commonly used technologies include excavation, in situ stabilization, and soil washing. Historically, bioremediation strategies relying on bacteria to transform pollutants have been challenged by the tight sorption of heavy- and middle-weight PAHs to soils, as this restricts aqueous phase transport required for bacterial degradation. Multiple studies have demonstrated fungi to be capable of degrading these inaccessible pollutants and other mixtures of hydrophobic pollutants (mycoremediation). Yet, when fungi have been introduced to polluted soils (mycoaugmentation), they have not been able to outcompete the native microbiota long enough to degrade the contaminants of concern over the long term. It is possible that a thorough characterization of the indigenous fungi at a given site may provide some insights into the development of targeted in situ mycoremediation strategies.

Although incorporating site microbes has been generally acknowledged as important for some time, the techniques enabling thorough assessment of microbial ecosystems are relatively new. Consequently, little is known about PAH-associated microbiomes in general, and even less is known about PAH-associated fungal communities. The work presented in this dissertation aims to address this knowledge gap by leveraging recent advances in high-throughput sequencing technology to design and validate targeted mycoremediation strategies. To this end, the overarching goal of this dissertation was to develop and test a framework for incorporating native fungi into a bioremediation strategy to expand such sustainable remediation options to sites where they have not been relevant in the past.

In the first aim of this dissertation research, advances in high-throughput sequencing were used to identify potential biostimulation targets in soils moderately polluted with PAHs. The next generation sequencing (NGS) platform, Illumina, was utilized to sequence the large sub-unit (LSU) gene commonly used as a marker gene in fungal community studies. Relationships were examined between concentrations of over 31 different polycyclic aromatic hydrocarbons and the pollutant-associated communities to test whether there were any fungi capable of tolerating high levels of these toxic contaminants. In this aim, fungal genera were identified that contained species closely related to known PAHs and petroleum hydrocarbon degraders. In all, this work identified 32 targets for biostimulation, based on Spearman rank correlations between prevalence and mid- and high-molecular weight PAHs. Ascomycetes were found to have higher levels of diversity than any other phylum in this subset of biostimulation targets. These data suggest that ascomycete fungi are more likely to be present in heavily polluted soils than basidiomycete fungi (which had previously been subjects of much interest). Overall, this work illustrates that polluted soils harbor fungal biostimulation targets, specifically within Ascomycota.

The second aim of this thesis research was to use the precision bioremediation assessment in highly polluted soils and then to evaluate a range of amendments with the goal of identifying strategies to stimulate the fungal communities that dominate these PAH-associated fungal communities. Here we applied the approach we fine-tuned in the first aim to the AWI soils, as these soils have some of the highest documented PAH-concentrations. Again, Ascomycota were found to be more prevalent in these soils, so an isolate obtained from AWI was used to compare alternative stimulation techniques between three substrates they are known to grow on: chitin, cellulose, and wood. We used anthracene degradation as a proxy for PAH degradation, which we monitored in sacrificial simplified bioreactors responding to the three amendments. T. harzianum is also known to have enzymes which degrade PAHs, but it is unknown which ecological role uses those enzymes, and thus which ecological role we should promote. T. harzianum was grown in the presence of chitin, cellulose, and wood as substrates in liquid culture with anthracene. Chitin was found to stimulate the highest anthracene removal, with a 0.1% (w/v) amendment resulting in ~93% degradation. While ~13% less than chitin, 1% (w/v) cellulose was also found to stimulate ~46% more anthracene degradation than wood, which had no improvement over the abiotic losses (~33% on average). This is notable because the “go to” method for stimulating fungi in the past has been wood supplements. This work provided insight into alternative stimulation strategies to target specific ecological roles that may better degrade PAHs in situ.

For the third and final aim of this dissertation research, the two most promising amendments were added with and without Trichoderma harzianum spores to test several mycoremediation treatment strategies in soil bioreactors and compare them with a (no carbon added) nutrient stimulation treatment. Pollutants were added as aged Atlantic Wood Industries soil delivering aged pollutants. Triplicate reactors from each treatment were sequenced at time zero, after two weeks, and after one month. At each sampling time, RNA was extracted, converted to cDNA, and submitted to Illumina MiSeq library preparation targeting the LSU region for fungal community analysis in addition to the V4 region of the 16S rDNA for bacterial community analysis. Statistical analyses using DESeq2 identified responders among the groups of reactors subjected to the different biostimulation treatments. Taxa from both the fungal and the bacterial communities responded differentially to the amendments. Fungi were found to comprise the majority of the significant responders. This work also found that mycoaugmented strains were not successful in establishing themselves as prominent members of the active community. This represents one of the earliest studies to directly measure mycoaugmentation failure. These data propose a hypothesis about functional redundancy inhibiting establishment of augmented fungi as already established fungi outcompete them for freshly added nutrients. Over 90% degradation was observed over the course of one month regardless of treatment-interestingly, the highest degradation was found in the nutrient amendment (no carbon added) treatment. These results show similar degradation across the soil bioreactors, yet different microbial growth, which supports the hypothesis that there is community-level functional redundancy and multiple metabolic food webs that result in the observed pollutant degradation.

Overall, this dissertation work demonstrates how significant advances in sequencing technology can be implemented in design and monitoring stages of bioremediation. This work also suggests that significant advances could be possible through the application of targeted metatranscriptomic analysis. Through incorporating such insights as described in this dissertation, this research brings the field of bioremediation one step closer to successfully engineering microbiomes to degrade contaminants of concern.