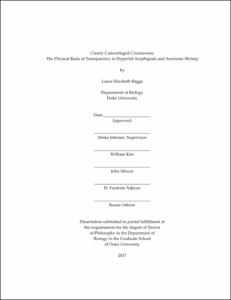 This dissertation research focused on the ways in which clear crustaceans with complex bodies (i.e. with hard cuticles, thick muscles, and other internal organs) maintain transparency across their entire body volume. I used transparent crustacean species that had relatively large (> 25 mm long and > 2 mm thick) bodies and that occupied physically different (pelagic vs. benthic reef) habitats. Studying these transparent crustaceans and making comparisons with closely related opaque crustaceans provided some of the first insights into the puzzling problem of the physical basis of transparency in whole organisms.

First, I examined the ultrastructure of the cuticle of hyperiid amphipods, the first surface to interact with light, to understand what features may minimize reflectance. I investigated the cuticle surfaces of seven species of mostly transparent hyperiids using scanning electron microscopy and found two previously undocumented features that reduced reflectance. I found that the legs of Cystisoma spp. were covered with an ordered array of nanoprotuberances that functioned optically as a gradient refractive index material to reduce reflections. Additionally, I found that Cystisoma and six other species of hyperiids were covered with a monolayer of homogenous nanospheres (approximately 50 nm to 350 nm in diameter) that were most likely bacteria. Optical modeling demonstrated that both the nanoprotuberances and the monolayers reduced reflectance by as much as 250-fold. Even though the models only considered surface reflectance and not internal light scattering, these models showed that the nanoprotuberances and spheres could improve crypsis in a featureless habitat where the smallest reflection could render an animal vulnerable to visual predation.

Second, I took a morphological approach to investigate how light scattering may be minimized internally. Using bright field microscopy, I explored whether there were any gross anatomical differences in the abdominal muscles between a transparent species of shrimp, Ancylomenes pedersoni, and a similarly sized opaque shrimp species, Lysmata wurdemanni. I found no differences in muscle fiber size or any other features. Using transmission electron microscopy (TEM) to visualize muscle ultrastructure, I found that the myofibrils of the transparent species were twice the diameter of the opaque species (mean values of 2.2 μm compared to 1.0 μm). Over a given distance of muscle, light passes through fewer myofibrils due to their larger diameter, with fewer opportunities for light to be scattered at the interfaces between the high-index myofibrillar lattice and the surrounding lower-index fluid-filled sarcoplasmic reticulum (SR). Additionally, because transparency is not always a static trait and can sometimes be disrupted after exercise or physiological stress, I compared the ultrastructure of muscle in transparent A. pedersoni shrimp with the ultrastructure of muscle in A. pedersoni that had temporarily turned opaque after exercise. I found that in this opacified tissue, the fluid-filled space around myofibrils had an increased thickness of 360 nm as compared to a normal thickness of 20 nm. While this could have been a fixation artifact, this result still suggests that opacified tissue had some change in osmolarity or increase in fluid. Models of light scattering across a range of thicknesses and possible refractive indices showed that this observed increase in fluid-filled space dramatically reduced transparency.

Third, I further investigated how exertion or physiological stress may disrupt transparency, what may occur in the tissues to cause this disruption, and what may explain the increased fluid-filled SR interface. I hypothesized that increased perfusion, or an increase in blood volume between muscle fibers, can disrupt the normal organization of tissue, resulting in increased light scattering. I measured pre- and post-exercise perfusion via the injection of a specific fluorescent stain (Alexa Fluor 594-labeled wheat germ agglutinin) that labeled the sarcolemmal areas in contact with hemolymph and the endothelial cells of the blood vessels, and found more open vessels and greater hemolymph perfusion around fibers post-exercise. Changing salinity in the shrimps’ tanks, wounding the shrimp, and injecting proctolin (a vasodilator) were also associated with increased opacity and perfusion. To visualize the shrimps’ overall muscle morphology, I used Diffusible Iodine-based Contrast-Enhanced Computed Tomography (DICECT) to scan one control (transparent) and one experimental (opaque) A. pedersoni. The resulting images added further support to my hypothesis that hemolymph volume in the muscle increases in post-exercise opacified A. pedersoni.