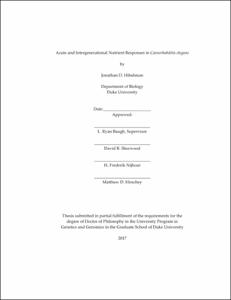 Nearly all animals live in environments with fluctuations in nutrient availability. The ability to sense and respond to these changes is essential for survival. Nutrition impacts physiology immediately, but can also have long-lasting effects across generations. The nematode Caenorhabditis elegans is particularly well-adapted to thrive in conditions of variable food availability. Here we find that starvation responses in C. elegans are largely independent of the larval stage at which worms experience starvation. Starvation in worms results in shrinkage, delayed growth upon recovery, and ultimately death. In order to adapt to starvation, metabolism is dramatically altered. At a gross level, this can be seen in a reduction of mitochondrial genomes and a more fragmented network of mitochondria.

Insulin-like signaling is a key cell signaling pathway controlling nutrient responses. We interrogate the role of insulin-like signaling in regulation of the acute starvation response. We show that daf-16/FoxO restructures carbohydrate metabolism by driving carbon flux through the glyoxylate shunt and gluconeogenesis and into synthesis of trehalose, a disaccharide of glucose. Trehalose is a well-known stress protectant, capable of preserving membrane organization and protein structure during abiotic stress. Metabolomic, genetic, and pharmacological analyses confirm increased trehalose synthesis and further show that trehalose not only supports survival as a stress protectant, but also serves as a glycolytic input. Further, we provide evidence that metabolic cycling between trehalose and glucose is necessary for this dual function of trehalose. This work demonstrates that daf-16/FoxO promotes starvation resistance by shifting carbon metabolism to drive trehalose synthesis, which in turn supports survival by providing an energy source and acting as a stress protectant.

In addition to acute changes in response to the nutrient environment, effects can persist intergenerationally. Maternal effects of environmental conditions produce intergenerational phenotypic plasticity. Adaptive value of these effects depends on appropriate anticipation of environmental conditions in the next generation, and mismatch between conditions may contribute to disease. However, regulation of intergenerational plasticity is poorly understood. Dietary restriction (DR) delays aging but maternal effects have not been investigated. We demonstrate maternal effects of DR in the roundworm C. elegans. Worms cultured in DR produce fewer but larger progeny. Nutrient availability is assessed in late larvae and young adults, rather than affecting a set point in young larvae, and maternal age independently affects progeny size. Reduced signaling through the insulin-like receptor daf-2/InsR in the maternal soma causes constitutively large progeny, and its effector daf-16/FoxO is required for this effect. nhr-49/Hnf4, pha-4/FoxA, and skn-1/Nrf also regulate progeny-size plasticity. Genetic analysis suggests that insulin-like signaling controls progeny size in part through regulation of nhr-49/Hnf4, and that pha-4/FoxA and skn-1/Nrf function in parallel to insulin-like signaling and nhr-49/Hnf4. Furthermore, progeny of DR worms are buffered from adverse consequences of early-larval starvation, growing faster and producing more off- spring than progeny of worms fed ad libitum. These results suggest a fitness advantage when mothers and their progeny experience nutrient stress, compared to an environmental mismatch where only progeny are stressed. This work reveals maternal provisioning as an organismal response to DR, demonstrates potentially adaptive intergenerational phenotypic plasticity, and identifies conserved pathways mediating these effects.