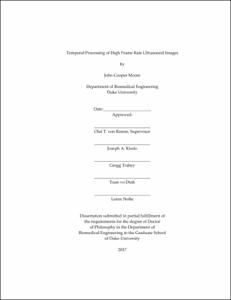 High frame rate ultrasound imaging is a nascent field that holds the potential to bridge the gap between strictly anatomic imaging and functional, or physiologic, imaging. Other currently available functional imaging methods in ultrasound, such as Doppler, ARFI, and SWEI, require transmit-receive sequences different than used in standard B mode or volumetric imaging, requiring a reduction in imaging rate. Using the Duke University Phased Array System, T5, a high frame rate imaging scheme was developed for live acquisition of adult echocardiographic images at rates up to 1000 per second.

It is hypothesized that with higher imaging rates low signal level, rapidly moving blood flowing through vessels can be differentially extracted from B mode or volumetric images and provide enhanced contrast with respect to high signal surrounding or overlapping stationary or slowly moving structures. TO achieve this goal, an online method of subtracting sequential images was developed for the T5 system. The origin of the increase in contrast is investigated, and the statistical model of speckle in B mode images is extended to include the changes in brightness in a fixed location in the image field as targets pass through that location. Further studies were directed at increasing the contrast between blood and surrounding tissues by summation of difference images and the limitations of such summing for cyclical blood flow.

It is concluded that:

A) With the T5 system, high images rates are feasible without significant reduction of image resolution or signal to noise.

B) Statistical targets, or speckle, have a pixel-by-pixel linear relationship between successive image frames between changes in brightness and amount of translation up to the diffraction limited resolution in azimuth and proportional to the pulse length in range. Then, brightness within a given pixel is statistically independent from the brightness with the same pixel in temporally subsequent images.

D) Subtracted images of independent speckle patterns are statistically independent with each other and summation of such images within physiological constraints in time will further increase the contrast of blood with respect to vessel walls and surrounding tissue.