The Problem of Nothingness: Early Modern Literature, Science, and the Vacuum 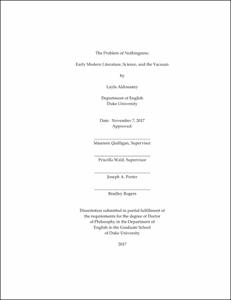 My dissertation explores literature’s participation in these cross-disciplinary debates over nothingness; I argue that literary forms create the possibilities of scientific discourse later in the century. To fully understand the complex network of relationships that formed early modern science as well as, in consequence, our own experimental philosophy requires examining the challenges that literature issues to science. To demonstrate the mutually productive relationship between the literature and science of the period, my dissertation charts the seventeenth century's different literary conceptions of nothingness, and the contribution of writers such as John Donne, William Shakespeare, John Milton, and Margaret Cavendish to these debates over both the nature of nothingness and, more broadly, how we come to know anything at all. Literary texts – in the form of sonnets, tragicomedies, and even proto-science fiction – produce knowledge in ways that anticipate and subtly revise scientific processes.

The first chapter, “Encompassing Nothingness in Donne’s Poetry” evaluates two of John Donne’s poems from Songs and Sonnets alongside the introduction of the symbol of zero into Western systems of calculation and the invention of the microscope. I argue for a re-reading of poems such as “A Valediction: Forbidding Mourning” and “The Flea” that accounts for their seemingly paradoxical representation of absence and presence by considering Donne’s thought in terms of mathematical developments as well as developing literary technologies. The culmination in the poem’s well-known image of the compass, drawing a circle centered on a point inscribes the Arabic symbol for zero; the poem thus participates in the broader project of transforming nothingness into an appropriate object for scientific inquiry. Donne’s poetry also anticipates scientific method by forming imagined communities of observers whom he addresses and leads through a process of witnessing nothingness, thus revealing its status as an object of scientific inquiry, and consequently, as something after all.

Chapter 2, “Playing at Nothing in The Winter’s Tale,” looks at the treatment of nothingness in this play as a model for literature’s production of experimental science in the seventeenth century. In The Winter’s Tale, Leontes’s solipsistic assurance of his wife’s infidelity and the infallibility of his own senses gives way to knowledge formed collectively by a performance that reforms and reconciles the community. This performance suggests that the community, rather than the solitary individual, is the basis for building knowledge. Through analyzing Leontes’s method of knowledge production versus the communal models that close the play, I argue that The Winter’s Tale preemptively figures the shift from a patronage-based court philosophy to an experimental philosophy. In doing so, The Winter’s Tale helps to revise the dominant narrative about when the idea of communal witnessing begins by emphasizing the importance of literary contributions to conceptualizing the history of science.

Chapter 3, “Experience in Paradise Lost” pays particular attention to the shift from observation to experience as represented in Milton’s poetry. Engaging with critical debates over Milton’s materialism, I read Milton’s epic as it rejects the idea of creation ex nihilo and instead focuses on creation out of Chaos. Just as Boyle justified his explorations into atomistic philosophy and rejected the idea of a universe created by random atomic interactions, Milton’s universe, too, is established and ordered by a divine Creator. Unlike Boyle, however, Milton rejects the experiment, which he identifies with a fallen world, in favor of experience – described in Paradise Lost as wisely used, individually mediated reason.

Chapter 4, “‘To Make Your World of Nothing’: Nothingness in Margaret Cavendish’s The Blazing World” examines Cavendish’s 1666 utopian proto-science fiction romance in conjunction with Robert Hooke’s 1665 Micrographia, a text that explores the minute worlds opened to human observation with the microscope’s invention. Cavendish’s text envisions a world-building that is entirely the result of individual human invention – in her words, one made of “Nothing but Wit.” Cavendish focuses on the imaginative possibilities opened by a creation focused on seeming nothingness; her text fantasizes about a world in which this act of creation forces multiple boundaries to break down (human / animal, scientist / experiment). The Blazing World challenges the rules for scientific practice enshrined by the Royal Society by imagining experiments that create hybrids that challenge the seemingly objective stance of the scientific observer as well as the facts produced in the laboratory itself.