L’Orgue fantastique: Imagination in the Organ Lofts of Paris, 1918-1939 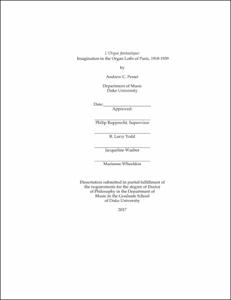 This dissertation seeks to reevaluate French repertoire for the organ in the broader context of French music and society in the years between the two world wars. I argue that leading composers for the instrument were not cloistered between the musically conservative walls of the church but were rather fully engaged in cultural and musical shifts occurring across the Parisian musical scene. By analyzing music of Louis Vierne, Jehan Alain, and Olivier Messiaen, I address different ways in which these composers wrote for the organ in the early twentieth century as well as ways in which these composers engaged the world around them. Louis Vierne – older than Alain and Messiaen by forty years – represents an older generation rooted in late nineteenth- century romanticism. The way in which he composed for the organ was not only influenced by composers around him but also in the links to French musical heritage of the eighteenth and nineteenth centuries. Alain and Messiaen – born three years apart – were colleagues who shared similar interests and were inspired by influences beyond the borders of the church and the state. For these composers, the organ was not an instrument tethered to conservative styles of composition but rather one that was fully able to engage with contemporary musical styles and absorb outside influence just as much as music of other genres and for other instruments.