Fictions of the Afterlife: Temporality and Belief in Late Modernism 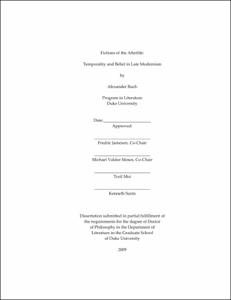 This dissertation analyzes the period of late modernism (roughly 1930-1965) by attending to an understudied subgenre: fictions that depict the experiences of the dead in the afterworld. The project originated from my observation that a number of late modernist authors resorted to this type of writing, leading to the question of what made them do so. Such a project addresses the periodization and definition of late modernism, a period that has received relatively little critical attention until recent years. It also contributes indirectly to the study of European culture before and after the Second World War, identifying clusters of concerns around common experiences of belief and time during the period.

To approach this question, I adopt a situational approach. In this type of reading, I attempt to reconstruct the situations (both literary and extra-literary) of specific authors using historical and biographical material, then interpret the literary work as a response to that situation. Such a methodology allows me to ask what similarities between situations led to these convergent responses of afterlife writing. My primary objects are afterlife novels and plays by Jean-Paul Sartre, Simone de Beauvoir, Wyndham Lewis, Flann O'Brien, and Samuel Beckett.

I find that the subgenre provided late modernists with the literary tools to figure and contest changes in experiences of belief and time in mid-20th century Europe. The situation of modernism is marked by <italic>the loss of belief in the world</italic>, a failure in the faith in action to transform the world, and <italic>the serialization of time</italic>, the treatment of time as static repetition and change as something that can only occur at the individual rather than the systemic level. While earlier modernists challenged these trends with the production of idiosyncratic private mythologies, late modernists encountered them as brute facts, leading to a shift in aesthetic sensibilities and strategies. Belief was split between private opinion and external submission to authority, and change reappeared under the figure of catastrophe.