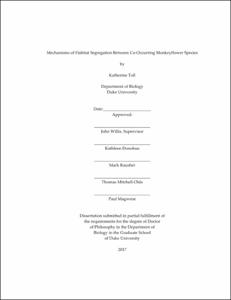 Closely related, ecologically similar species are often separated at a small scale while being broadly sympatric. In Northern California’s coast range two monkeyflower species, Mimulus guttatus and Mimulus nudatus co-occur at the local scale but populations rarely overlap although they are often separated by less than a meter. In Chapter 1, I used a combination of reciprocal transplants, observational data and laboratory experiments to test a series of biotic and abiotic hypotheses for the observed pattern. M. guttatus naturally grows in wetter areas and is often submerged for up to four months of the year. A lab experiment found that M. nudatus was unable to survive submerged for more than a week, limiting its distribution in seasonal streams inundated for months and dominated by M. guttatus. Species transplanted into populations of heterospecific congeners produced large proportions (up to 80%) of inviable seeds due to hybrid inviability between these two species. Species differences in submergence tolerance establishes some degree of habitat association, then strong frequency-dependent selection against rare immigrants via hybrid seed inviability reduces the frequency of the less numerous species and maintains habitat segregation.

Resource or reproductive competition between ecologically similar co-occurring species can cause competitive exclusion or generate selection for character displacement. Hybrid seed lethality between two spatially segregated co-occurring monkeyflower species, Mimulus guttatus and M. nudatus, causes dramatic reductions in viable seed set when each species is a rare immigrant. In Chapter 2, to understand the mechanisms driving this pattern, I tested whether traits were associated with hybridization rate and whether selection differed between habitats in each species and F2 hybrids. To determine the genetic basis of species differences, I performed genetic mapping experiments in the greenhouse and in each habitat. I found mixed evidence for divergent selection between habitats for flowering time, flower size, and leaf area. However, flower size was the best predictor of hybridization rate in M. guttatus, suggesting the potential for selection for reproductive character displacement. Hybridization increased with decreasing flower size (increasing trait similarity) for M. guttatus in M. nudatus’ native habitat. Few quantitative trait loci contributed to flower size differences but were context dependent; different loci contributed in different habitats. At the individual QTL level, viability selection favored smaller flowers, whereas phenotypic selection analysis suggested that selection favored larger flowers in both habitats. Genotype frequencies deviated significantly from Mendelian expectations in the field, and all markers significantly differed between habitats suggesting that the difference in survival to flowering between habitats is highly polygenic. In sum, an ecologically important trait, flower size, contributes to habitat segregation through its effect on hybridization rate, and is controlled by few genetic loci in the lab and in the field.