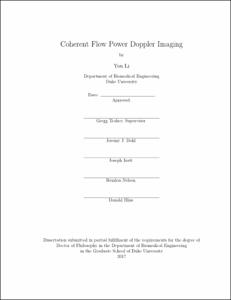 Coherent flow power Doppler (CFPD) imaging was proposed as a sensitive flow detection and imaging technique for slow flow and small vessels. In this work, we present the study on CFPD from principles to clinical evaluation.

The performance of CFPD in flow detection was evaluated with simulations and flow phantom experiments under various imaging conditions, and compared with the performance of PD. It is found that CFPD provides an improvement of Doppler signal-to-noise ratio (SNR) of 7.5-12.5 dB over PD in slow flow and small vessel imaging. The improvement in SNR translates to higher Doppler image contrast, faster frame rate, or lower limit-of-detection (LOD). In similar imaging conditions of slow flow, CFPD may detect up to 50% slower flow than PD.

To demonstrate the clinical relevance of CFPD, we built a real-time CFPD imaging system and conducted a pilot clinical study with it. In the system, the CFPD technique was implemented on a Verasonics Vantage 256 research scanner. The software beamformer and CFPD processing were implemented on the graphics processing unit (GPU). The Doppler frame rate of the system is 10 frames per second for a field-of-view (FOV) of 10 cm axially and 4 cm laterally.

In the pilot clinical study, the liver vasculatures of 15 healthy human volunteers were imaged by a trained sonographer using the real-time CFPD system. The raw data corresponding to a 132 Doppler videos were captured and processed offline. The SNR of the vessels in the CFPD and PD images were measured and analyzed. In all of the 132 data sets, CFPD provides higher SNR than PD. The average improvement in SNR is 8.6 dB. From the visual analysis of the images, it can be seen that the improvement in SNR leads to more sensitive detection of small vessels in deeper parts of the liver.