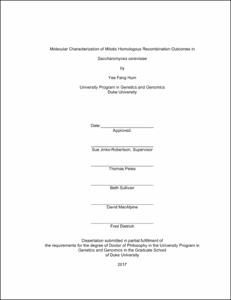 Mitotic homologous recombination (HR) is vital for accurate repair of DNA strand breaks caused by endogenous and exogenous sources. However, this high-fidelity repair pathway also can lead to genome rearrangements when dispersed sequences are used for repair. During normal growth, spontaneous DNA strand breaks are presumably generated during DNA replication and transcription, and from the attack by endogenous agents such as reactive oxygen species (ROS). Though the exact nature of endogenous lesions that initiate HR is not well understood, double-strand breaks (DSBs) rather than single-strand breaks (SSBs) are thought to be the main culprit. Because spontaneous HR events can lead to development of human diseases and sporadic cancers, identifying the primary type of DNA strand breaks, either DSBs or SSBs, is central to understanding how genome instability arises. Using the yeast Saccharomyces cerevisiae as a model system, the focus of this thesis is to delineate early molecular steps (DNA end resection and synthesis) during mitotic DSB-induced HR events and to perform comparative analysis of DSB-induced and spontaneous HR repair outcomes. To this end, the first part of this thesis examined the relative contribution of DNA end resection and DNA synthesis in determining the DSB-associated repair outcomes, such as distributions of crossover and noncrossover outcomes, as well as the length of a key recombination intermediate, heteroduplex (hetDNA). The main conclusion from this work is that both end resection and DNA synthesis are required to obtain normal DNA repair outcomes and hetDNA profiles. A unifying model is that decreased end resection reduces stability of strand invasion intermediates, limiting the extent of DNA synthesis and hence shortening hetDNA. The second and third parts of this work directly compared the molecular structures of HR outcomes associated with a defined DSB and with those arising spontaneously. Two different approaches were employed to systematically characterize the molecular structures of recombination intermediates in repair events. In the second part of this thesis, mapping of gene conversion events (nonreciprocal transfer of information that results from mismatch-repair activity) following allelic repair of a DSB revealed that DSB-induced HR events shared similar repair profiles with those of previously described spontaneous recombination events, confirming that DSBs are the main contributor to spontaneous HR. In the third part of this thesis, mapping of hetDNA in DSB-induced and spontaneous HR events in cells with normal and elevated ROS levels further confirmed that DSBs are the primary initiator of spontaneous HR. Mapping of hetDNA additionally revealed complexities within hetDNA associated with a defined DSB. Collectively, this work not only advances our knowledge of the fundamental molecular mechanisms of HR, but also provides in vivo experimental support for DSBs as the major physiological lesion that initiates spontaneous HR.