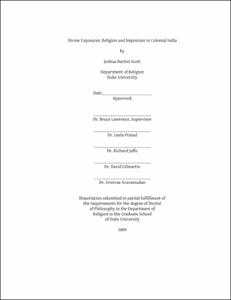 My dissertation interrogates the figure of the priestly charlatan in colonial India. It begins in a theoretical register by arguing that the unmasking of charlatans serves as a metonym for the secularizing procedures of modernity. Tales of charlatans' exposure by secularist skeptics promise a disenchanted world freed from the ill-gotten influence of sham divines; such tales evacuate the immanent frame of charismatic god-men, thereby allowing the extension and consolidation of secular power. I trace the trope of charlatanic exposure, beginning with Enlightenment anxieties about "priestcraft," continuing on to nineteenth century criticisms of religion, and then making a lateral move to colonial India. I suggest that by the 1830s it had become difficult for many English critics to extricate the problem of priestly imposture from the broader problematic of empire and, more specifically, from the specter of the "crafty brahmin." I track the cultural crosscurrents that conjoined English and Indian anticlericalisms, not only to insist on the centrality of colonial thinkers to the constitution of modernity, but also to reconsider modernity's putative secularity. The "anticlerical modernity" that I identify brings religious and secular skeptics together in a shared war on sacerdotal charisma, best observed at the interstices of empire.

The dissertation disperses the intellectual lineage of the "imposture theory of religion" by rerouting it through colonial India. The imposture theory, or the notion that religion is but a ruse concocted by crafty priests to dupe gullible masses, was central to the emergence of secular modernity and its mistrust of religion. Closely associated with the English and French Enlightenments, it was also pervasive in British polemics against Indian religions. My dissertation demonstrates how in its colonial redeployment the imposture theory came to abut Indic imaginaries of religious illusion, ranging from folkloric spoofs of gurus' authority to philosophical debates about the ontological status of "maya." Starting from religious controversies of the colonial era, my interrogation of Indic illusion extends from the ninth century philosopher Shankaracharya to the sixteenth century saint Vallabhacharya to the twentieth century guru Osho. Its focus, however, is on three nineteenth century religious reformers: Karsandas Mulji, Dayanand Saraswati, and H.P Blavatsky. Through archival research, textual analysis (in Hindi, Gujarati, and English), and theoretical inquiry, I insinuate these three colonial thinkers into the history of the imposture theory of religion. In doing so, my aim is to contribute to scholarship on the genealogy of religion, particularly in colonial contexts.