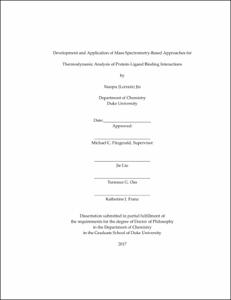 The characterization of protein stability changes and protein-ligand interactions on the proteomic scale is important for understanding the biology of cellular processes. The identification and quantification of protein-ligand binding affinities is critical for disease state analyses and drug discovery. A mass spectrometry-based technique, Stability of Proteins from Rates of Oxidation (SPROX), has been established for the thermodynamic analysis of protein stability and protein-ligand interactions. In the first part of this dissertation, a previously published iTRAQ-SPROX protocol is improved by incorporating a filter assisted sample preparation (FASP) protocol to significantly reduce sample loss during the experiment. Also, in order to eliminate methionine as a potential contaminant that can cause signal suppression during LC-MS/MS analysis, TCEP•HCl is used to quench the H2O2 oxidation instead of methionine. This avoids the potential reaction between the free methionine and the iTRAQ reagents. The improved protocol, referred to hereafter as the iTRAQ-FASP-SPROX protocol, is shown to increase the peptide/protein coverages for less concentrated cell lysate samples, and it is applied here to study the protein-ligand interaction networks between human ARPE-19 cells lysis and two different iron chelators (HAPI and Exjade). Information on potential protein targets of these two iron chelators are reported.

In the second part of this dissertation, a targeted MS-based approach for protein-ligand binding analysis is developed to analyze targeted subsets of proteins in a proteome. The so-called PAB-SPROX protocol is demonstrated to be applicable for the detection and relative quantitation of targeted methionine-containing peptides in +/- ligand samples by using isotopically labeled light and heavy PAB (i.e. 12C6-PAB and 13C6-PAB). Multiple reaction monitoring (MRM) and parallel reaction monitoring (PRM) methods are demonstrated to be amenable to PAB-SPROX analyses. In addition to proof-of-principle studies involving the cylclophilin A-cyclosporine A binding interaction, the PAB-SPROX protocol was used to validate the direct interaction between YBX1 protein and tamoxifen using very limited amount of purified YBX1 protein. Applications of PAB-SPROX protocol have also included the validation of potential binding targets of Staurosporine, Manassatin A and Tamoxifen. The PAB-SPROX studies with these latter ligands facilitated the identification of false positives in previous proteome-wide SRPOX studies.