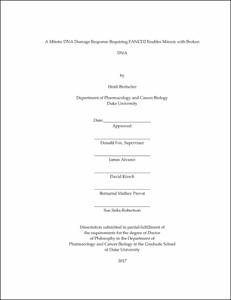 In order to maintain genome integrity cells employ a set of well conserved DNA damage checkpoints. DNA damage checkpoints are active during interphase and serve to prevent mitosis with broken DNA. Mitosis with broken DNA is associated with DNA segregation errors, genome instability and even cell death in resulting daughter cells. It has recently has been appreciated that cells can compensate for damaged DNA during mitosis. However, little is known about this mitotic DNA damage response.

Additionally, we find that single-stranded DNA (ssDNA) is present during papillar cell mitosis following DNA DSB induction. ssDNA is present on both the edge of segregating and lagging DNA as well as spanning short regions between fragments of lagging DNA. The observation that ssDNA is present suggests that while papillar cells do not initiate complete repair, some level of DNA resection must occur following DNA DSB induction. In line with this reasoning, we find a role for the DNA damage sensor complex, the MRN complex, in papillar cell survival following I-Cre induction. The MRN complex consists of three components, Mre11, Rad50 and NBS1. Loss of Mre11 or NBS1 results in reduced papillar cell survival following I-Cre induction. Furthermore, Mre11 is a nuclease. Thus, we propose that MRE11 acts at sites of DNA DSBs in papillar cells to create ssDNA. We hypothesize that formation of ssDNA is sufficient to form a DNA/protein bridge between segregating and lagging DNA to enable proper DNA segregation. Interestingly, resistance to DNA damage is also observed in many cancers. We speculate that such DNA damage resistant cancer cells may utilize similar mechanisms to compensate for DNA breaks during mitosis.