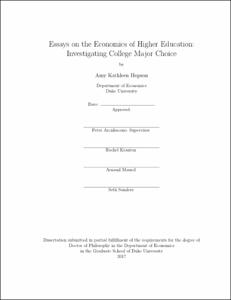 This dissertation consists of two separate essays on major choice in higher education. In the first chapter, I investigate how differences in information affect students' major choices over time. Since college has such a short time horizon, the amount of information students have before coming in may play a big role in how well they are matched to their final major. They may also choose their initial major based on how uncertain they are about their match with that major, especially since they have the option to switch in future periods. This paper discusses students' search process in finding a major, and how information impacts behavior and ultimate outcomes. I set up a tiered structure where the student must first choose a field (either STEM or Non-STEM) and then choose a major within that field. This allows for matches within a particular field to be correlated, thus providing information on non-chosen majors within the same field. The student makes decisions based on the choices that will maximize her expected utility over her entire college career. Since her current choices and information set depend on past decisions, and since there are a finite number of periods, I can solve the dynamic decision problem using backwards recursion.

Once I solve for the student's optimal decision path, I estimate the model using data from the Campus Life and Learning Survey from Duke University. The CLL data allows me to observe students' expected majors at multiple points throughout their college career. I attempt to find the model parameters that best match particular moments in the data. The first key type of moment involves overall switching patterns, that is, the probability of choosing a particular field in the initial period, and then the probabilities of later decisions conditional on the first choice. The second key type of moment I match captures which students are making which decisions. I look at how academic ability, as measured by SAT Math scores, and gender affect the choice probabilities in the data.

I find that the STEM field has a much lower average match value than non-STEM, but a higher variance in matches. Thus, students are less certain about how well they might match with STEM. Students with higher math ability are more likely to choose STEM in the first period, but the sorting by ability greatly increases in the later period. It is costly to switch into STEM from non-STEM in the second period, while the reverse move is virtually costless. All of these results support the theoretical result that students will choose the field with more uncertainty in the early periods (given similar expected match values) because of the option to switch later if they get a bad match. This is especially true when the more uncertain field is also more costly to switch into in later periods, as in the case of STEM.

In the second chapter, co-authored with Thomas Ahn, Peter Arcidiacono, and James Thomas, we estimate an equilibrium model of grading policies. On the supply side, professors offer courses with particular grading policies. Professors set both an intercept and a return to studying and ability in determining their grading policies. They make these decisions, attempting to maximize their own utility, but taking into account all other professors' grading policies. On the demand side, students respond by selecting a bundle of courses, then deciding how much to study in each class conditional on enrolling. We allow men and women to have different preferences over different departments, how much they like higher grades, and how costly it is to exert more effort in studying.