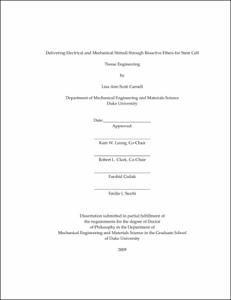 Regenerative medicine holds the promise of providing relief for people suffering from diseases where treatment has been unattainable. The research is advancing rapidly; however, there are still many hurdles to overcome before the therapeutic potential of regenerative medicine and cell therapy can be realized. Low in frequency in all tissues, stem cell number is often a limiting factor. Approaches that can control the proliferation and direct the differentiation of stem cells would significantly impact the field. Developing an adequate environment that mimics in vivo conditions is an intensively studied topic for this purpose. Collaboratively, researchers have come close to incorporating nearly all biological cues representative of the human body. Arguably the most overlooked aspect is the influence of electrical stimulation. In this dissertation, we examined polyvinylidene fluoride (PVDF) as a new biomaterial and developed a 3D scaffold capable of providing mechanical and electrical stimuli to cells in vitro.

The fabrication of a 3D scaffold was performed using electrospinning. To obtain highly aligned fibers and scaffolds with controlled porosity, the set-up was modified by incorporating an auxiliary electrode to focus the electric field. Highly aligned fibers with diameters ranging from 500 nm to 15 µm were fabricated from colorless polyimide (CP2) and polyglycolic acid (PGA) and used to construct multilayer scaffolds. This experimental set-up was used to electrospin &#945;-phase PVDF into the polar &#946;-phase. We demonstrated the transition to the &#946;-phase by examining the crystalline structure using x-ray diffraction (XRD), differential scanning calorimetry (DSC), fourier transform infrared spectroscopy (FTIR) and polarized light optical microscopy (PLOM). We confirmed these results by observing a polarization peak at 80°C using the thermally stimulated current (TSC) method. Our results proved the electrospinning process used in our investigation poled the PVDF polymer in situ.

TThe influence of architecture and topographical cues was examined on 3D scaffolds and films of CP2 polyimide and PVDF. Culture of human mesenchymal stem cells (hMSCs) for 7 and 14 days demonstrated a significant difference in gene expression. The fibers upregulated the neuronal marker microtubule associated protein (MAP2), while downregulation of this protein was observed on films. Gap junction formation was observed by the expression of connexin-43 after 7 days on PVDF films attributed to its inherent pyroelectric properties. Connexin-43 expression on fibers showed cell-cell contact across the fibers indicating good communication in our 3D scaffold.

A scaffold platform was designed using PVDF fibers that allowed us to apply electrical stimulation to the cells through the fibers. The electrically stimulated PVDF fibers resulted in enhanced proliferation compared to TCPS as evidenced by a 10% increase in the uptake of EdU. Protein expression revealed upregulation of neuronal marker MAP2. Our findings indicate this new platform capable of delivering mechanical, electrical, topographical and biochemical stimuli during in vitro culture holds promise for the advancement of stem cell differentiation and tissue engineering.