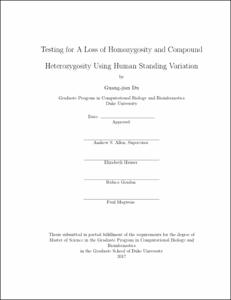 Homozygosity indicates the state of possessing two identical alleles of a particular gene, one inherited from each parent. Homozygous genes are these where both copies share identical alleles at one specific site, this can result from identical mutations on one site or several sites on both copies. In contrast, heterozygous genes are those with different alleles at a given site, compound heterozygous genotype occurs when there is more than one mutation on either copy of the gene but at different sites.

Homozygosity plays a key role in the risk of recessive Mendelian diseases. Because for recessive diseases, only when dysfunctional mutations are expressed on both copies of an individual's genome, these variants could cause genetic diseases such as cystic fibrosis and phenylketonuria disease.

Some work has been done on ranking human genes based on their tolerance to functional genetic variants. These studies give a sense of how unusual functional mutation is in the context of a particular gene. Other work like genetic constraints test for a depletion of rare singleton qualifying variation over expectation, based on mutation rate, using large population database. All these work has been useful for identifying genes with strong dominant effects. However, there is currently no method for identifying recessive intolerant gene.

Here, we propose a method for identifying recessive intolerant genes by looking for a deficit of homozygosity and compound heterozygosity using human standing variations. We first develop a novel computationally efficient and robust statistical model to evaluate the viability of individuals according to the number of copies of a selected gene harboring rare dysfunctional variants, using human standing variation data. Then, we build a general framework to assess whether there's evidence supporting a shift towards a deficit of homozygosity or compound heterozygosity from the distribution of expected genotypes. Third, we apply the statistical Score tests to evaluate the deficit probability of a given gene. Finally, we use a simulation model to further confirm the accuracy of our framework.