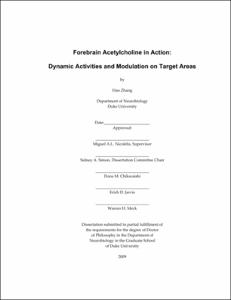 Forebrain cholinergic projection systems innervate the entire cortex and hippocampus. These cholinergic systems are involved in a wide range of cognitive and behavioral functions, including learning and memory, attention, and sleep-waking modulation. However, the <italic>in vivo</italic> physiological mechanisms of cholinergic functions, particularly their fast dynamics and the consequent modulation on the hippocampus and cortex, are not well understood. In this dissertation, I investigated these issues using a number of convergent approaches.

Second, to further elucidate the dynamic activities and physiological functions of cholinergic neurons, putative cholinergic MS neurons were identified in behaving rats. These neurons had much higher firing rates during rapid-eye-movement (REM) sleep, and brief responses to auditory stimuli. Interestingly, their firing promoted theta/gamma oscillations, or small-amplitude irregular activities (SIA) in a state-dependent manner. These results suggest that putative MS cholinergic neurons may be a generalized hippocampal activation/arousal network.

In conclusion, my results have revealed that the firing of putative cholinergic neurons promotes hippocampal activation, and the consequent phasic ACh release is tightly coupled to theta oscillations. These fast cholinergic activities may provide exceptional opportunities to dynamically modulate neural activity and plasticity on much finer temporal scales than traditionally assumed. By the subsequent promotion of IEG induction, ACh may further substantiate its function in neural plasticity and memory consolidation.