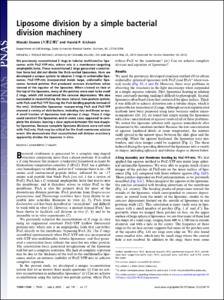 View / Download
1.2 Mb
Date
Authors
Osawa, Masaki
Erickson, Harold P
Repository Usage Stats
63
views
34
downloads
Abstract
We previously reconstituted Z rings in tubular multilamellar liposomes with FtsZ-YFP-mts, where mts is a membrane-targeting amphiphilic helix. These reconstituted Z rings generated a constriction force but did not divide the thick-walled liposomes. Here we developed a unique system to observe Z rings in unilamellar liposomes. FtsZ-YFP-mts incorporated inside large, unilamellar liposomes formed patches that produced concave distortions when viewed at the equator of the liposome. When viewed en face at the top of the liposome, many of the patches were seen to be small Z rings, which still maintained the concave depressions. We also succeeded in reconstituting the more natural, two-protein system, with FtsA and FtsZ-YFP (having the FtsA-binding peptide instead of the mts). Unilamellar liposomes incorporating FtsA and FtsZ-YFP showed a variety of distributions, including foci and linear arrays. A small fraction of liposomes had obvious Z rings. These Z rings could constrict the liposomes and in some cases appeared to complete the division, leaving a clear septum between the two daughter liposomes. Because complete liposome divisions were not seen with FtsZ-mts, FtsA may be critical for the final membrane scission event. We demonstrate that reconstituted cell division machinery apparently divides the liposome in vitro.
Type
Journal article
Subject
Bacteria
Bacterial Proteins
Cytoskeletal Proteins
Luminescent Proteins
Recombinant Fusion Proteins
Cytokinesis
Unilamellar Liposomes
Biophysical Phenomena
Permalink
https://hdl.handle.net/10161/16454
Published Version (Please cite this version)
10.1073/pnas.1222254110
Publication Info
Osawa, Masaki; & Erickson, Harold P (2013). Liposome division by a simple bacterial division machinery. Proceedings of the National Academy of Sciences of the United States of America, 110(27). 10.1073/pnas.1222254110. Retrieved from https://hdl.handle.net/10161/16454.
This is constructed from limited available data and may be imprecise. To cite this article, please review & use the official citation provided by the journal.
Collections
More Info
Show full item record