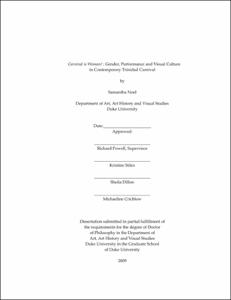 While great strides have been made in the study of Trinidad Carnival, there has yet to be a robust inquiry into how women have contributed to its evolution. One major reason for this shortcoming is that the dominant cultural discourse relies on a reductive

dichotomy that recognizes the costumes created prior to the 1970s as creative and those made after the 1970s as uncreative. This arbitrary division of the costume aesthetic reflects a distinct anti-feminist bias that sees women's spirited emergence in Carnival

territory in the 1970s as apolitical.

My dissertation exposes this dilemma, and seeks to undermine this

interpretation, by its focus on how women's bodies, their presentation, and their acknowledgment of the body's potential for non-verbal articulation impacted the evolution of performance practices and the costume aesthetic in Trinidad Carnival. I

explore how the predominance of women in Carnival since the 1970s and the bikinibased costume aesthetic that complements this change is suggestive of women's urgent need to manipulate the body as an aesthetic medium and site of subversion. Critical to

this argument is a close examination of certain female figures who have had a sustainable presence in Trinidad Carnival's history. My project acknowledges the <italic>jamette</italic>, a working class woman who defied Victorian tenets of decorum in preindependence

Trinidad. This figure has been overlooked in the predominant scholarship of Trinidad Carnival history. Another section of my dissertation explores the influence of the Jaycees Carnival Queen competition. Women of mostly European descent participated in this Carnival-themed beauty pageant that remained popular until the

1970s. I also examine the legend of <italic>soucouyant</italic> (an old woman who turns into a ball of fire at night and sucks the life blood from unsuspecting victims) and how this figure can be deployed to reinterpret <italic>Jouvay</italic> (the ritual that marks the beginning of Trinidad Carnival).