Fibronectin aggregation and assembly: the unfolding of the second fibronectin type III domain. 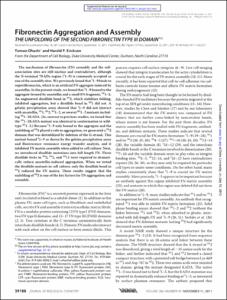 View / Download
5.3 Mb
Date
Authors
Ohashi, Tomoo
Erickson, Harold P
Repository Usage Stats
72
views
38
downloads
Abstract
The mechanism of fibronectin (FN) assembly and the self-association sites are still unclear and contradictory, although the N-terminal 70-kDa region ((I)1-9) is commonly accepted as one of the assembly sites. We previously found that (I)1-9 binds to superfibronectin, which is an artificial FN aggregate induced by anastellin. In the present study, we found that (I)1-9 bound to the aggregate formed by anastellin and a small FN fragment, (III)1-2. An engineered disulfide bond in (III)2, which stabilizes folding, inhibited aggregation, but a disulfide bond in (III)1 did not. A gelatin precipitation assay showed that (I)1-9 did not interact with anastellin, (III)1, (III)2, (III)1-2, or several (III)1-2 mutants including (III)1-2KADA. (In contrast to previous studies, we found that the (III)1-2KADA mutant was identical in conformation to wild-type (III)1-2.) Because (I)1-9 only bound to the aggregate and the unfolding of (III)2 played a role in aggregation, we generated a (III)2 domain that was destabilized by deletion of the G strand. This mutant bound (I)1-9 as shown by the gelatin precipitation assay and fluorescence resonance energy transfer analysis, and it inhibited FN matrix assembly when added to cell culture. Next, we introduced disulfide mutations into full-length FN. Three disulfide locks in (III)2, (III)3, and (III)11 were required to dramatically reduce anastellin-induced aggregation. When we tested the disulfide mutants in cell culture, only the disulfide bond in (III)2 reduced the FN matrix. These results suggest that the unfolding of (III)2 is one of the key factors for FN aggregation and assembly.
Type
Journal article
Subject
Humans
Disulfides
Fibronectins
Gelatin
Protein Structure, Tertiary
Protein Folding
Mutation
Protein Stability
HEK293 Cells
Permalink
https://hdl.handle.net/10161/16466
Published Version (Please cite this version)
10.1074/jbc.m111.262337
Publication Info
Ohashi, Tomoo; & Erickson, Harold P (2011). Fibronectin aggregation and assembly: the unfolding of the second fibronectin type III domain. The Journal of biological chemistry, 286(45). 10.1074/jbc.m111.262337. Retrieved from https://hdl.handle.net/10161/16466.
This is constructed from limited available data and may be imprecise. To cite this article, please review & use the official citation provided by the journal.
Collections
More Info
Show full item record