Three Essays on Analyses of Marine Resources Management with Micro-data 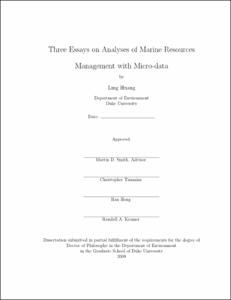 Chapter 1: Although there are widely accepted theoretical explanations for overexploitation of common-pool resources, empirically we have limited information about the micro-level mechanisms that cause individually efficient exploitation to result in macro inefficiency. This paper conducts the first empirical investigation of common-pool resource users' dynamic and strategic behavior at the micro level. With an application to the North Carolina shrimp fishery, we examine fishermen's strategies in a fully dynamic game that accounts for latent resource dynamics and other players' actions. Combining a simulation-based Conditional Choice Probability estimator and a Pseudo Maximum Likelihood estimator, we recover the profit structure of the fishery from fishermen's repeated choices. Using the estimated structural parameters, we compare the fishermen's actual exploitation path to the socially optimal one under a time-specific limited entry system with transferrable permits, and then quantify the dynamic efficiency costs of common-pool resource use. We find that individual fishermen respond to other users by exerting a higher level of exploitation effort than what is socially optimal. Based on our counterfactual experiments, we estimate the efficiency costs of this behavior to be 17.39\% of the annual revenues from the fishery, which translates into 31.4\% of the rent without deducting the cost of capital.

Chapter 2: Although hypoxia is a threat to coastal ecosystems, policy makers have limited information about the potential economic impacts on fisheries. Studies using spatially and temporally aggregated data generally fail to detect statistically significant fishery effects of hypoxia. Limited recent work using disaggregated fishing data (microdata) reports modest effects of hypoxia on catches of recreationally harvested species. These prior studies have not accounted for important spatial and temporal aspects of the system, however. For example, the effects of hypoxia on catches may not materialize instantaneously but instead may involve a lagged process with catches reflecting cumulative past exposure to environmental conditions. This paper develops a differenced bioeconomic model to account for the lagged effects of hypoxia on the North Carolina brown shrimp fishery. It integrates high-resolution oxygen monitoring data with fishery-dependent microdata from North Carolina's trip ticket program to investigate the detailed spatial and temporal relationships of hypoxia to commercial fishery harvest. The main finding is that hypoxia potentially resulted in a 12.9\% annual decrease in brown shrimp harvest from 1999-2005. The paper also develops two alternative models---a non-differenced model and a polynomial distributed lag model---and results are consistent with the main model.

Chapter 3: The emergence of ecosystem-based management suggests that traditional fisheries

management and protection of environmental quality are increasingly interrelated. Fishery managers, however, have limited control over most sources of marine and estuarine pollution and at best can only adapt to environmental conditions. We develop a bioeconomic model of optimal harvest of an annual species that is subject to an environmental disturbance. We parameterize the model to analyze the effect of hypoxia (low dissolved oxygen) on the optimal harvest path of brown shrimp, a commercially important species that is fished in hypoxic waters in the Gulf of Mexico and in estuaries in the southeastern United States. We find that hypoxia alters the qualitative pattern of optimal harvest and shifts the season opening earlier in the year; more severe hypoxia leads to even earlier season openings. However, the quantitative effects of adapting fishery management to hypoxia in terms of fishery rents are small. This suggests that it is critical for other regulatory agencies to control estuarine pollution, and fishery managers need to generate value from the fishery resources through other means such as rationalization.