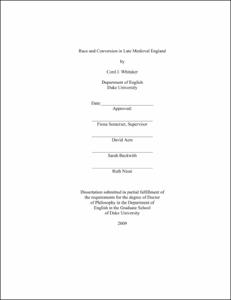 Despite general consensus among scholars that race in the West is an early modern phenomenon that dates to the seventeenth and eighteenth centuries, late medieval English texts of the fourteenth and fifteenth centuries expend no small amount of effort depicting the differences between people&mdash;individuals and groups&mdash;and categorizing those people accordingly. The contexts for the English literary concern with human difference were the Crusades and associated economic expansion and travel into Eastern Europe, the Middle East, and North Africa. Scholars who have argued that race is present in medieval texts have generally claimed that race is subordinate to religion, the dominant cultural force in medieval Europe. In &ldquo;Race and Conversion in Late Medieval England,&rdquo; I argue that race is not necessarily subordinate to religion. Rather, racial and religious discourses compete with one another for ideological dominance. I examine three texts, juxtaposed in only one extant manuscript, London, British Library, MS Cotton Vespasian E.16; the <italic>Three Kings of Cologne</italic>, the <italic>Siege of Jerusalem</italic>, and the physiognomy portion of the <italic>Secretum Secretorum</italic> together narrate competition between race and religion as community&ndash;forming ideologies in England through their treatments of religious identity and physical characteristics. In addition, I study Chaucer&rsquo;s <italic>Man of Law's Tale</italic>, which distills down questions of religious difference to genealogy and the interpretation of blood. &ldquo;Race and Conversion in Late Medieval England&rdquo; argues that racial ideology emerges from and competes with religion in late medieval English literature as a means of consolidating power in crusading Western Europe, even as the ever present possibility of Christian conversion threatens to undermine the essentializing work of race.