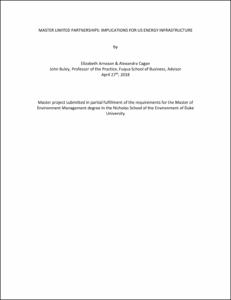 View / Download
1.1 Mb
Date
Authors
Arnason, Elizabeth
Cagan, Alexandra
Advisor
Buley, John
Repository Usage Stats
669
views
3,550
downloads
Abstract
In 1981, Apache Corporation created the first Master Limited Partnership (MLP) with the creation of Apache Petroleum Corporation. Since then, the MLP model has served as an important financing vehicle for oil and natural gas transport and processing infrastructure in the United States. An MLP is a type of publicly-traded partnership whereby limited partners purchase “units” on an exchange. In a traditional structure, the MLP is 98% owned by limited partners; the remaining 2% is owned by the general partner. The MLP pays distributions to limited partners, which operate similarly to dividends paid by traditional C-Corporations. In many MLPs, the general partner also owns incentive distribution rights (IDRs) to its general partner, which entitles it to a growing percentage of the distribution as quarterly distributions to the limited partners increase. Beginning in late 2009, capital investment in the midstream space grew substantially to support the increased production emerging from the shale boom. Because of the tax advantage that the MLP mode provided, companies formed MLPs to hold these assets. The number of energy MLPs grew from 16 in 1995 to a peak of 124 in 2013.However, between the summer of 2014 and early 2016, crude oil and natural gas lost nearly 75% and 60% of their values, respectively. As MLPs have faced challenges in recovering from the market downturn, many have shifted away from the traditional model that was created 1981. Two key trends have emerged: (1) the “roll-up” of MLPs into their corporate parent companies and (2) the elimination of incentive distribution rights (IDR) payments to the general partner, which had traditionally been used as a form of informal corporate governance. This paper seeks to answer the following questions: 1. Why has the MLP model has historically been a successful vehicle for aggregating capital and encouraging infrastructure investment? 2. What factors in the MLP model contributed to a performance decline in 2014 and 2015? 3. How will energy companies continue to use the MLP model as a vehicle for financing projects moving forward? This paper seeks to answer these questions through three case-study study analyses of recent “roll-up” and simplification transactions, which serve as representations of broader market trends. The case studies discussed in this paper are the roll-up of Targa Resources Partners (NGLS) into its parent company Targa Resources Corporation (TGRP), the roll-up of ONEOK Partners (OKS) into its parent company ONEOK, Inc. (OKE), and Plains All American’s (PAA) decision to purchase its general partners’ 2% ownership interest. Each MLP is a unique entity structures that involves complex financial engineering aimed at producing the most tax efficient and profitable firm while maintaining long term stable cash flows. Each case, although unique, presents various firms reactions to the recent market changes. Through our research, we identified primary problems faced by MLPs in the market downturn. First, because MLPs trade on yield, they face a heightened pressure to continue to grow distributions. This growth became unsustainable in the lower-cash flow environment of 2015, leading to lower coverage ratios. Second, a substantial portion of an MLPs distributable cash is paid to the general partner, rather than the limited partners, through IDRs. While required by most partnership agreements, these IDRs erode the cost-of-capital advantage of an MLP. Third, while the midstream sector is typically characterized by fee-based revenues, MLPs still faced direct commodity exposure during this period, causing variability in cash flows. While there has been some recovery in the commodity market, MLPs have been slower to recover, and, as such, many have chosen to pursue roll-up or simplification transactions. However, we believe the MLP model will still be utilized moving forward. Investment in upstream crude oil and natural gas production is predicted to increase. Further, a new trend of companies forming MLPs to support their own, rather than third-party, upstream operations is emerging. Our research suggests that operating an MLP in this environment requires a heightened awareness of (1) the true cost of IDRs, should an MLP choose to continue to include these in their partnership agreement; (2) unsustainable distribution growth, and (3) revenue streams that are not backed by long-term, fee-based contracts, thereby exposing the MLP to commodity price fluctuations.
Type
Master's project
Department
Nicholas School of the Environment and Earth Sciences
Subject
crude oil
natural gas
energy infrastructure
master limited partnerships
energy
energy finance
Permalink
https://hdl.handle.net/10161/16551
Citation
Arnason, Elizabeth; & Cagan, Alexandra (2018). Master Limited Partnerships: Implications for US Energy Infrastructure. Master's project, Duke University. Retrieved from https://hdl.handle.net/10161/16551.
Collections
More Info
Show full item record