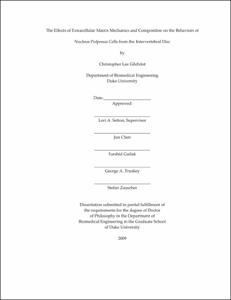 Intervertebral disc (IVD) disorders are a major contributor to disability and health costs. Disc disorders and resulting pain may be preceded by changes which first occur in the nucleus pulposus (NP) region of the IVD, where significant alterations in tissue cellularity, composition, and structure begin early in human life and continue with increasing age and degeneration. These changes coincide with the loss of a distinct cell population, notochordally-derived immature NP cells, which may play a key role in the generation and maintenance of this tissue. These cells reside in a gelatinous, highly-hydrated extracellular matrix (ECM) environment and exhibit in situ cell-matrix and cell-cell interactions which are quite distinct from cells in other regions of the disc or in other cartilagenous, including expression of laminin cell-matrix receptors and cell-associated laminin proteins. The ECM environment is known to be a key regulator of cellular behaviors, with ECM ligands and elasticity modulating cell adhesion, organization, differentiation, and phenotype. The primary motivating hypothesis of this thesis is that the unique ECM environment of the NP plays a key role in modulating immature NP cell behaviors, and that laminin ligands, in combination with ECM elasticity, modulate immature NP cell behaviors including adhesion, organization, and phenotype.

NP cells isolated from immature NP tissues were found to express high levels of the laminin-binding integrin subunit alpha 6 ex situ and maintain this expression over time in culture. Function blocking studies revealed this receptor to be a key regulator of NP cell adhesion to laminin, in contrast to cells from the adjacent AF region, which did not express this receptor nor adhere to laminin. Cell adhesion studies demonstrated that NP cells preferentially interact with two laminin isoforms, LM-511 and LM-332, in comparison to other ECM proteins, with enhanced cell attachment, spreading, and adhesion strength on surfaces coated with these ligands. These findings correspond with laminin isoform and receptor expression patterns identified in immature NP tissues. Additionally, NP cell-cell interactions were found to be modulated by both ECM ligand and substrate stiffness, with soft, laminin-functionalized substrates promoting self-assembly of NP cells into cell clusters with morphologies similar to those identified in immature NP tissues. Finally, culture of immature NP cells on soft, laminin-rich substrates was found to promote a key measure of NP cell function, proteoglycan synthesis.

The studies presented here demonstrate that immature NP cells interact uniquely with laminin extracellular matrix proteins, and that laminin ligands and matrix elasticity are two key regulators of NP cell organization and phenotype in the IVD. These findings suggest that alterations in one or both of these factors during IVD aging or degeneration may contribute to the differentiation or loss of this unique cell population. Additionally, these results indicate that soft, laminin-functionalized biomaterials may be appropriate for in vitro culture and expansion of immature NP cells, as well as for use in NP tissue engineering strategies.