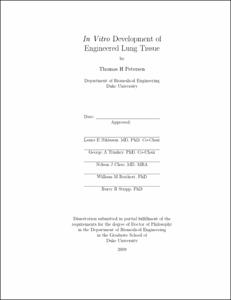 Lung disease is the third most common cause of death in the United States, resulting in 400,000 deaths annually \cite{ALA:08}. For many diseases, lung transplantation is the only definitive treatment, yet only 2700 lung transplants are performed each year, limited primarily by a lack of donor organs \cite{Christie:09}. The development of engineered lung tissue, which could be created using a patient's own cells, could have a significant impact on the treatment of end-stage lung disease.

In this dissertation, we describe the first work intended to engineer whole lung tissue. We utilize a decellularized rodent lung scaffold that is then seeded with pulmonary cells in order to create engineered lung tissue. We will first describe the production of a decellularized lung matrix, which retains several key characteristics of normal lung matrix and is superior to other matrix options for lung tissue engineering. We will analyze the mechanical integrity of the scaffolds and compare the collagen, elastin, fibronectin, and proteoglycan content of the scaffolds to native tissue. We also use a variety of imaging modalities to study the architecture, microstructure and ultrastructure of the scaffolds.

We will then document the design and validation of a bioreactor that is capable of the long-term culture of whole lung tissue in the laboratory. To validate the bioreactor design, we culture native lung tissue for up to 7 days and demonstrate that the bioreactor enables the maintenance of cell viability, cellular differentiation state, and lung morphology.

We then demonstrate that the decellularized scaffolds, when cultured in the bioreactor with a suitable cell source, can support the adherence and proliferation of a wide range of cell types, including pulmonary endothelial, epithelial, and mesenchymal cells. We examine the effects of bioreactor conditions, including medium type, ventilation and perfusion, and an air-liquid interface, on the growth and differentiation of epithelial and endothelial lung tissue. Finally, we evaluate several key functional aspects of the engineered tissues, including surfactant production and the formation of a barrier between the vascular and airway compartments.