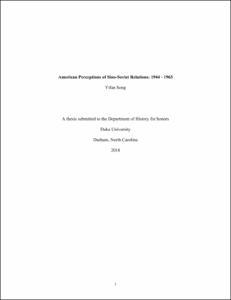 View / Download
492.8 Kb
Date
Author
Song, Yifan
Advisor
Matlock, Jack
Repository Usage Stats
167
views
1,342
downloads
Abstract
For the first half of the Cold War, the Soviet Union and China were perceived by many within the U.S. government to be a monolithic communist bloc. However, the development of the Sino-Soviet Split proved monolithic communism false. Why then did the U.S. take so long to realize the mounting differences and problems between China and the Soviet Union? My thesis explores the American perceptions of Sino-Soviet relations and what drove these perceptions in the period between 1944 and 1963. My research shows that U.S. perceptions of relations between Soviet Communists and Chinese Communists were fairly open and diverse prior to 1950. A series of events in 1949/50 then caused perceptions to become rigid and monolithic. These events included the Communist victory in the Chinese Civil War, the rise of McCarthyism, the adoption of a militant Cold War grand strategy as embodied in NSC-68, and the Chinese intervention in the Korean War. The rigidity in perceptions of the Sino-Soviet relationship between 1950 and 1956 especially in the higher echelon of policymakers was a setback for U.S foreign policy, but some degree of pluralism in perceptions was preserved in the lower ranks of the intelligence community. Following Khrushchev’s “Secret Speech” of early 1956, which marked a definitive ideological split between the Soviet Union and China, U.S. perceptions of Sino-Soviet relations began shedding its paralyzing rigidity. Between 1956 and 1963, the intelligence community became increasingly cognizant of Sino-Soviet problems and sources of potential conflict, but were still slow to explicitly state that a Sino-Soviet Split has occurred. Not until 1962-3 did the CIA make this explicit.
Type
Honors thesis
Department
History
Subject
Sino-Soviet Split
Cold War
American foreign policy
Sino-American relations
diplomatic history
communism
Permalink
https://hdl.handle.net/10161/16664
Citation
Song, Yifan (2018). American Perceptions of Sino-Soviet Relations: 1944 - 1963. Honors thesis, Duke University. Retrieved from https://hdl.handle.net/10161/16664.
Collections
More Info
Show full item record