From Sunningdale to Good Friday: The Challenge of the Relationship Between Politics and Paramilitaries for Achieving Peace in Northern Ireland During The Troubles 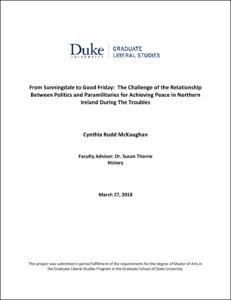 View / Download
757.1 Kb
Date
Author
McKaughan, Cynthia Rudd
Advisor
Thorne, Susan
Repository Usage Stats
178
views
327
downloads
Abstract
The British government made three official attempts to end the conflict in Northern Ireland, known as The Troubles: the Sunningdale Agreement of 1973, the Anglo-Irish Agreement of 1985, and the Good Friday Agreement of 1998. Drawing on media coverage and the actual text of each agreement, as well as the considerable body of scholarly research on each individual process, this project identifies the issues confronting the British government in all three instances: which organizations in Northern Ireland to include at the negotiating table, what role the British government would play in Northern Ireland in the treaty’s aftermath, what security measures to take to stop the violence while ensuring human rights, how to address the political challenges posed by paramilitary organizations, and whether or not to include other nations in negotiating the peace, as well as in Northern Ireland’s affairs once the Troubles ended. The Good Friday Agreement succeeded where its predecessors failed primarily because of the decision to include representatives of paramilitary groups despite their history of complicity in violence. All sides finally agreed to participate in a political power-sharing arrangement that militants on both sides long viewed as a betrayal to the cause for which they willingly killed and died. The Good Friday Agreement’s utilization of the Republic of Ireland and international authorities strengthened the commitment to new political structures. Finally, the British removal of Direct Rule and military occupation, as well as reforms to Northern Ireland’s policing and justice, signaled the end of The Troubles. This project concludes by discussing recent events since the end of The Troubles that potentially affect the maintenance of peace in Northern Ireland.
Type
Master's thesis
Department
Graduate Liberal Studies
Subject
Northern Ireland
The Troubles
Sunningdale Agreement
Anglo-Irish Agreement
Good Friday Agreement
Permalink
https://hdl.handle.net/10161/16676
Citation
McKaughan, Cynthia Rudd (2018). From Sunningdale to Good Friday: The Challenge of the Relationship Between Politics and Paramilitaries for Achieving Peace in Northern Ireland During The Troubles. Master's thesis, Duke University. Retrieved from https://hdl.handle.net/10161/16676.
Collections
More Info
Show full item record