Where Have All the Youth Gone: Cruel Youth and Juvenile Crimes in 21st Century “Cruelty of Youth” Films from Japan and the United States 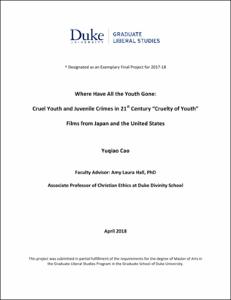 View / Download
65.5 Mb
Date
Author
Cao, Yuqiao
Advisor
Hall, Amy Laura
Repository Usage Stats
406
views
66
downloads
Abstract
In recent years, the phrase “cruelty of youth” has gained popularity in describing an understudied subgenre of youth films. Films in this subgenre portray young people’s tragic experiences and the unfolding real problems they face. My project examines and compares four “cruelty of youth” films from the 21st century: All About Lily Chou-Chou (2001) and The Blue Light (2003) from Japan, and Elephant (2003) and Mean Creek (2004) from the United States. This project examines the need for “cruelty of youth” films, in particular their importance in raising public awareness of and understanding about youth problems in the real world. In other words, films within this genre are not dystopic, speculative fiction, but realist in their depictions of extreme situations facing young people. The term itself, “cruelty of youth,” represents the duality of meaning in both “youth that are cruel” and “the cruelty experienced by youth.” My project explores the characteristics of “youth that are cruel.” These characteristics serve as a key to help adult viewers understand the connection between teenagers’ psychological states and their cruel deeds. In the last section, I will include a close reading to discuss the depictions of murder scenes from these selected films that involve youth. To help the viewers understand youth experiences and the cruelty teenagers inflict on one another, I also investigate these murder cases from the perspectives of the juvenile murderers, the young victims, and the teenage witnesses. I suggest that “cruelty of youth” films may be beneficial for young viewers in that they teach the fragility of life and may encourage young people to engage in discussions about youth cruelty with peers and with their elders.
Type
Master's thesis
Department
Graduate Liberal Studies
Subject
youth film
youth crime
japanese film
cultural
cruelty of youth
film comparison
Permalink
https://hdl.handle.net/10161/16677
Citation
Cao, Yuqiao (2018). Where Have All the Youth Gone: Cruel Youth and Juvenile Crimes in 21st Century “Cruelty of Youth” Films from Japan and the United States. Master's thesis, Duke University. Retrieved from https://hdl.handle.net/10161/16677.
Collections
More Info
Show full item record