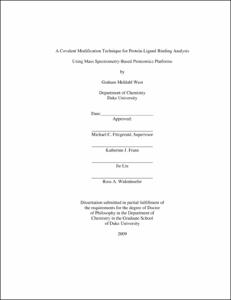 Described here is the development and application of a new technique designed to detect and quantify protein-ligand binding interactions with mass spectrometry-based proteomic platforms. This technique, termed SPROX (Stability of Proteins from Rates of Oxidation), uses an irreversible covalent oxidation labeling reaction to monitor the global unfolding reactions of proteins to measure protein thermodynamic stability. Two variations of the SPROX technique are established here, including one variation that utilizes chemical denaturant to induce protein unfolding and a second variation that utilizes temperature to denature proteins. The SPROX methodology is tested on five proteins including ubiquitin, ribonuclease A, bovine carbonic anhydrase II, cyclophilin A, and calmodulin. Results obtained on these model systems are used to determine the method's ability to measure the thermodynamic parameters associated with each protein's folding/unfolding reaction. Results obtained on calmodulin and cyclophilin A are used to determine the method's ability to quantify the dissociation constants of protein-ligand complexes.

The primary motivation for the development of the SPROX protocols in this work was to create a protein-ligand binding assay that could be interfaced with conventional mass spectrometry-based platforms. Two specific SPROX protocols, including a label-free approach and an oxygen-16/18 labeling approach, are developed and demonstrated using the thermal SPROX technique to analyze ligand binding in a model four-protein component mixture consisting of ubiquitin, ribonuclease A, bovine carbonic anhydrase, and cyclophilin A. The thermal SPROX technique's ability to detect cyclosporin A binding to cyclophilin A in the context of the model mixture is shown using both labeling approaches.

An application using the SPROX technique combined with a multi-dimensional protein identification technology (MudPIT)-based proteomics platform is also described. In this application, which utilized an isobaric mass tagging strategy, 325 proteins in a yeast cell lysate are simultaneously assayed for CsA-binding. This study was also used to investigate the protein targets of an already well-studied immunosuppressive drug, cyclosporin A. Two of the ten protein targets identified in this work are known to interact with CsA, one through a direct binding event and one through an indirect binding event. The eight newly discovered protein targets of CsA suggest a molecular basis for post-transplant diabetes mellitus, which is a side effect of CsA in humans.