The Hunt for the Battle of Anghiari: Can You Value One Artist Over Another? 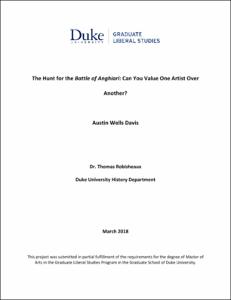 View / Download
391.8 Kb
Date
Author
Davis, Austin
Advisor
Robisheaux, Thomas
Repository Usage Stats
207
views
474
downloads
Abstract
In 1503, Florentine art master Leonardo da Vinci received the commission from Gonfaloniere Piero Soderini to depict the Florentine victory at Anghiari. The Battle of Anghiari gave Florence control over central Italy during the Lombardy Wars. The marquee battle became a staple point for Florentine defense and the perfect battle to depict inside the Grand Council Chamber of the Palazzo Vecchio. However, Leonardo’s Battle of Anghiari was never finished and the wall was assigned to Giorgio Vasari fifty years later. Instead of painting over Leonardo’s work, Vasari created another wall for his Battle of Marciano, thus hiding Leonardo’s work. Little progress was made in finding Leonardo’s Battle of Anghiari, but the mystery began to unravel in 2007 with Maurizio Seracini’s search. This search caused an uproar from the art community when Seracini drilled into Vasari’s mural. A resistance to Seracini began, calling his project unethical and unconstitutional because it infringes on the cultural rights of Italy and the rights of Vasari. The opposition also deemed it unethical because it destroys the originality of Vasari’s mural. Seracini’s search was officially disbanded by the Florentine government due to the opposition it created. This project argues that Seracini’s search should be allowed to continue due to the benefits Florence would receive from finding the Battle of Anghiari. The dilemma Florence faces on whether to restart the project or leave Vasari’s mural as is can be answered by comparing the value of da Vinci and Vasari. The fame and wealth associated with Leonardo da Vinci is vastly greater than Vasari’s. Therefore, Florence should allow Seracini to finally uncover the Battle of Anghiari. The financial benefits of finding a lost Leonardo outweigh the risks of harming Vasari’s mural.
Type
Master's thesis
Department
Graduate Liberal Studies
Subject
Battle of Anghiari
Permalink
https://hdl.handle.net/10161/16702
Citation
Davis, Austin (2018). The Hunt for the Battle of Anghiari: Can You Value One Artist Over Another?. Master's thesis, Duke University. Retrieved from https://hdl.handle.net/10161/16702.
Collections
More Info
Show full item record