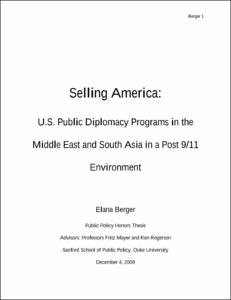 View / Download
492.3 Kb
Date
Author
Berger, Elana
Repository Usage Stats
466
views
1,004
downloads
Abstract
Since the terrorist attacks on September 11, 2001, foreign policy experts and U.S. government officials have emphasized the importance of public diplomacy in combating terrorism and ensuring national security. In the current climate of anti-American sentiment, “the war of ideas is more challenging than ever” and strong negative public opinion about the United States is pervasive (Pilon). Public diplomacy attempts to combat anti-American sentiment, focusing on Arab and Muslim populations where attitudes about America are particularly negative. Public diplomacy, “the promotion of America’s interests, culture and policies by informing and influencing foreign populations,” includes three categories of activities: international information programs, educational and cultural exchanges, and international nonmilitary broadcasting. While there is disagreement among foreign policy experts and government officials about how to best structure and improve public diplomacy programs, there is a general consensus that effective public diplomacy is essential to national security. Nevertheless, although many critics cite public opinion polls as evidence for the inefficacy of public diplomacy programs, it is not possible to know whether or not these programs are accomplishing their goals without proper evaluation methods that tie measurable results directly to programs. Therefore, determining whether or not there are effective evaluation techniques in place to measure the results of these programs is the necessary first step to assessing whether or not the programs accomplish their goals. There have been various programs, strategies and messages used since the September 11th attacks in 2001, in U.S. public diplomacy efforts in predominantly Muslim countries in the Middle East and South Asia. I analyzed evaluations of four public diplomacy programs in this region to address the following question: How are public diplomacy programs evaluated and do evaluations of these programs accurately reflect the quality of the programs? I chose these programs because they fit into the scope of my research, as far as geographic region and time frame, and because complete evaluations of these programs were publically-available. Since my research focuses on the quality of the evaluations and not the efficacy of the programs themselves, I needed to choose programs for which complete, thorough evaluations were available.
Type
Honors thesis
Department
Public Policy Studies
Subject
public diplomacy
Middle East
South Asia
anti-American sentiment
evaluations
exchange programs
Permalink
https://hdl.handle.net/10161/1671
Citation
Berger, Elana (2009). Selling America: U.S. Public Diplomacy Programs in the Middle East and South Asia in a Post 9/11 Environment. Honors thesis, Duke University. Retrieved from https://hdl.handle.net/10161/1671.
Collections
More Info
Show full item record