If You Build It, Perhaps Too Many People will Come: How Night Games Disrupted Wrigleyville , with lacking coverage from the Chicago Tribune 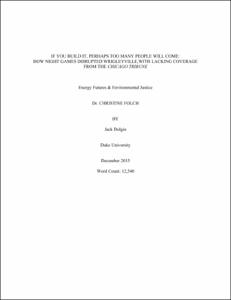 View / Download
316.9 Kb
Date
Author
Dolgin, Jack
Advisor
Folch, Christine
Repository Usage Stats
205
views
119
downloads
Abstract
In 1988, the Chicago Cubs became the last team in Major League Baseball to install lights at their baseball stadium. That meant the team could play games at night, which was a popular idea among its fans. But Wrigley Field was also unique in its urban location—situated in the middle of a neighborhood in Chicago, home to Victorian houses, and a mile from Lake Michigan. A question that often gets asked about the installation of lights is, what impact did that have on the team and attendance? This paper asks two different questions—what was the toll on the neighbors in Wrigleyville who lived next to the stadium, and how did newspaper coverage portray these effects? To answer both questions, this paper includes an analysis of every article in the biggest two Chicago newspapers, The Chicago Tribune and Chicago Sun-Times, that featured the words 'Wrigley Field' or 'Wrigleyville' in the year and a quarter following the installation of lights at Wrigley Field. The paper finds that while there were significant social and political impacts of the installation of lights on Wrigleyville—including a noisier neighborhood, parking problems, and reduced political leverage for constituents—The Chicago Tribune, owned by the owners of the Cubs at the time, focused much less on the impacts of night baseball games on the neighboring community than did The Chicago Sun-Times. The paper provides insight into the ways something as innocuous as night baseball games can shape a community—that adding a community center open at night can have significant repercussions. It also raises questions about the ways newspapers handle the real-life implications of sports events beyond merely boxscores and fans.
Description
Aptman Prize
Type
Course paper
Department
Cultural Anthropology
Subject
light
energy
Wrigley Field
journalism
sports stadiums
Chicago
Permalink
https://hdl.handle.net/10161/16739
Citation
Dolgin, Jack (2015). If You Build It, Perhaps Too Many People will Come: How Night Games Disrupted Wrigleyville , with lacking coverage from the Chicago Tribune. Course paper, Duke University. Retrieved from https://hdl.handle.net/10161/16739.
Collections
More Info
Show full item record