Stuyvesant Town: Evaluating the Beneficiaries and Victims of an Act of Urban Renewal for the Middle Class 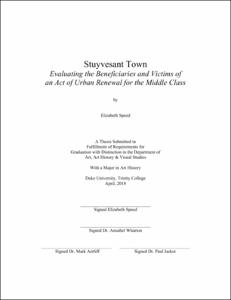 View / Download
4.0 Mb
Date
Author
Speed, Elizabeth
Advisor
Wharton, Annabel
Repository Usage Stats
166
views
1,494
downloads
Abstract
My thesis offers a critical analysis of Stuyvesant Town, a housing development built in New York City in 1947. At this time, Stuyvesant Town was the largest redevelopment housing project ever built in the United States and remains the largest housing development in New York City. Stuyvesant Town is comprised of 8,755 apartments that are distributed throughout 35 13-story red brick cruciform buildings. The development is bound by 20th Street to the north, 14th street to the south, Avenue C to the east, and 1st Avenue to the west. Although Robert Moses planned Stuyvesant Town for white middle-income residents, primarily veterans and their families, affordability protections have gradually been dismantled and Stuyvesant Town now offers over half of its units at market-rate rents to the relatively wealthy. While scholars often regard Stuyvesant Town as a harmful failure by criticizing its design and how it was developed, I investigate their views by examining the complex’s evolution over the 70 years since its conception. My thesis employs Moses’ writings and speeches, contemporaneous articles, scholarly literature, author interviews, and close on-site observation to analyze Stuyvesant Town’s goals, design, development, and impact on New York City. I conclude that while Stuyvesant Town’s layout and amenities separate it from New York City and make the development spatially disorienting, this separation is to the detriment of the city in which it resides, rather than to Stuyvesant Town’s residents. My research indicates that the development’s desirable location and its security and amenities, made possible by its residents’ socioeconomic status, have prevented its insular qualities from being harmful to its residents in the way that some other tower in the park style developments have been to their own and even make residents appreciate Stuyvesant Town’s containment. I also conclude that Stuyvesant Town is problematic for New York City as a whole because its affordability has devolved, while its lack of racial diversity has remained fairly consistent. It is no longer a middle-class bastion, contradicting its intended purpose, but it has maintained its predominantly white racial makeup. Government intervention is needed if Stuyvesant Town is ever to regain its capacity to fulfill Moses’ promise of middle-class affordability within New York City.
Type
Honors thesis
Department
Art, Art History, and Visual Studies
Subject
Stuyvesant Town
Urban Renewal
Housing
Middle Class
Robert Moses
New York City
Permalink
https://hdl.handle.net/10161/16772
Citation
Speed, Elizabeth (2018). Stuyvesant Town: Evaluating the Beneficiaries and Victims of an Act of Urban Renewal for the Middle Class. Honors thesis, Duke University. Retrieved from https://hdl.handle.net/10161/16772.
Collections
More Info
Show full item record