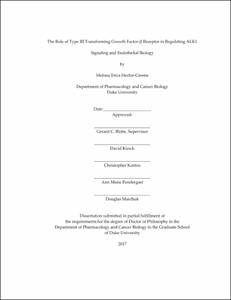 The Transforming Growth Factor-β (TGF-β) superfamily of ligands and receptors play critical roles in angiogenesis, evidenced by their essential role in physiologic angiogenesis and their perturbation in pathologic angiogenesis. In development, loss or mutation of Activin receptor-Like Kinase 1 (ALK1), an endothelium- specific TGF-β superfamily receptor kinase, leads to disordered angiogenesis and results in the hereditary vascular disease, Hereditary Hemorrhagic Telangiectasia (HHT). A co-receptor in the TGF-β superfamily, the type III Transforming Growth Factor-β Receptor (TβRIII), is known to be important for the vasculature, with genetic deletion of TβRIII resulting in embryonic lethality in mice characterized by severe defects in cardiac and hepatic vasculogenesis. Despite these observations, how TβRIII regulates the vasculature remains unknown. The aim of this study is to elucidate how TβRIII regulates ALK1 signaling and endothelial behavior.

We have uncovered a novel TβRIII/ALK1 interaction, the role of TβRIII in ALK1-mediated signaling and TβRIII’s role in functional endothelial biology. Understanding TβRIII’s function in the developing endothelium may lead to the development of innovative pharmacological treatments aimed at normalizing angiogenesis and improve our ability to anticipate the potential adverse effects of therapies targeting TGF-β superfamily receptors.