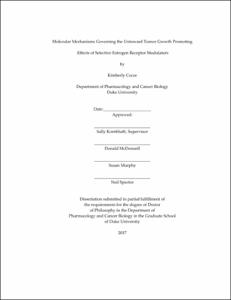 Luminal breast cancer is among the most prevalent diseases in women in the United States and worldwide. Historically, luminal cancers have been effectively managed with treatments that alter the availability of estrogens or their interaction with the estrogen receptor (ER). Among these, the selective estrogen receptor modulator (SERM) tamoxifen has been widely used. Being a SERM, tamoxifen can function as either an agonist or an antagonist of ER, depending on the cellular context. Within luminal breast cancers, tamoxifen initially behaves as an antagonist. Tamoxifen also has the added benefit of being an exceptionally well tolerated drug, demonstrating a minimal side effect profile.

While current first line therapeutics demonstrate considerable efficacy as treatments for luminal tumors, experimental and clinical evidence indicates that resistance to these therapies is seemingly inevitable for most patients. Mechanisms of resistance involve processes which are both dependent on and independent of the action of ER. Current drug development has focused on improving the ability of pharmacological agents to directly inhibit ER activity. As such, it stands to reason that the identification of therapeutics that may be paired with ER targeted therapies, or which are effective in the setting of resistance, remains critical.

The alteration of various cell intrinsic factors downstream of this reprogramming ultimately influences how these cells respond to and interact with the surrounding microenvironment, the result of which further impacts drug response. We demonstrate that one factor regulated by GRHL2, the Ly6/PLAUR containing protein 3 (LYPD3) is increased in abundance in the setting of endocrine resistance. Additionally, we further demonstrate that the presence of extracellular mitogenic factors, including fibroblast growth factors (FGF) and anterior grade protein 2 (AGR2), alters the transcriptional program of breast cancer cells as well as the activity of cancer associated fibroblasts, respectively.

We further extended our investigation to define aspects of the tumor microenvironment impacting treatment outcomes in luminal breast cancer using mouse models of breast cancer. Previously we observed that the presence of the endogenous SERM, 27-hydroxycholesterol, significantly accelerated the onset and growth of luminal breast cancers. Herein we demonstrate that 27HC derived from macrophages may be responsible, at least in part, for altering the growth of luminal tumors.

The results of these studies provide a comprehensive analysis of alternative pathways that are active in the setting of luminal breast cancer that ultimately alter treatment response. The critical assessment of these pathways has resulted in the indication of potential drug targets in this context, as well as in preclinical testing of alternative treatment approaches. Continued investigation in this vein may provide rational drug combinations for the treatment of advanced luminal breast cancer patients.