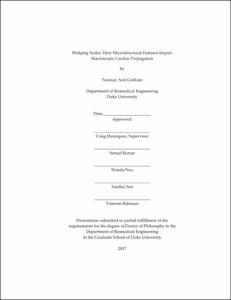 Cardiac arrhythmias such as atrial fibrillation and ventricular tachycardia are closely associated with microscopic fibrotic changes in cardiac structure that result in a heterogeneous myocardium. While the incidence of fibrosis is correlated with arrhythmia burden and recurrence, the mechanisms linking the two remain poorly understood. Previous experimental and simulation studies have identified changes in local conduction due to micron-scale structural heterogeneities. However, because of the limited ability to simultaneously study conduction over a range of spatial scales, it remains unclear how numerous microheterogeneities act in aggregate to alter conduction on the macroscopic scale. The overall objective of this dissertation is to elucidate and characterize the effect of microfibrosis on cardiac conduction, through the use of computational models and directly paired experimental studies.

The impact of fibrotic collagen deposition on reentrant conduction was first examined in a model of cardiac tissue. The presence of collagenous septa was shown to prolong the cycle length of reentry; the magnitude of reentry prolongation is correlated with the overall degree of fibrosis and the length of individual collagenous septa. Mechanistically, cycle length prolongation is caused by lengthening of the reentrant tip trajectory and alteration of restitution properties. An equivalent homogenized model of fibrosis is unable to recapitulate the observed cycle length prolongation, suggesting that the details of the microstructure greatly impact the observed macroscale behavior. A hybrid model generated by adding discrete heterogeneities to the coarse, homogenized model is able to partially reproduce cycle length prolongation by replicating the lengthened tip trajectory.

In order to examine the mechanisms by which cardiac microstructure influences global conduction, a new framework for paired computational and experimental studies using the engineered-excitable Ex293 cell line was developed. The Ex293 mathematical model incorporates several measures of variation in cellular and tissue electrophysiological properties, and is novel in its use of stochastic variation in a multidimensional model of tissue. Replicating the range of experimentally observed single-cell and macro-scale behavior requires introducing ionic conductance variation between individual cells and between tissues, as well as conductivity variation between tissues.

This framework was then utilized for paired studies in a geometry of idealized fibrosis to examine fibrosis-induced changes in micro- and macro-scale behavior. The presence of microscopic heterogeneities slows conduction and alters the curvature of the macroscopic wavefront. On the microscale, branching of tissue around heterogeneities leads to conduction slowing due to imbalances of electrical source and load, while wavefront collisions at sites of tissue convergence lead to acceleration of propagation. The observed macroscopic behavior is directly attributable to the combination of these microscopic effects and the tortuosity of propagation around heterogeneities. Under diseased conditions involving reduced excitability, alteration of these microscale behaviors leads to reversal of changes in wavefront curvature.

These findings advance our knowledge of the role of myocardial micro-heterogeneities in conduction. Further application of these techniques to examine how the effects of microstructure are dynamically modulated may help improve our understanding of the factors giving rise to cardiac arrhythmia.