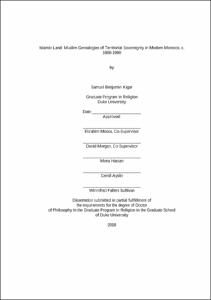 This dissertation asks how Moroccan scholars understood Islam's relationship to national territory in the twentieth century. It demonstrates how a genealogy of scholars adapted expansive theories of premodern Muslim imperial realms to the circumscribed Moroccan national territory that emerged in the early twentieth century. In the colonial period, Islamic law became a tool through which Muslim scholars argued for independent Moroccan sovereignty. It traces these discourses as they evolved into Morocco's postcolonial effort to incorporate neighboring territories, including Mauritania and the Western Sahara. It argues that this modern irredentism was part of a wider effort to frame the Moroccan nation-state by repurposing the Islamic political norms through which premodern Muslim empires governed in the region. This dissertation concludes by examining the decade after Morocco's 1975 occupation of the Western Sahara. This period saw the unfolding of a series of debates about the Moroccan king's gender and divinity. It shows that the king's body had become a metonymy for territory; and these debates were attempts to reconfigure the relationship between religion, land, and power in Morocco.