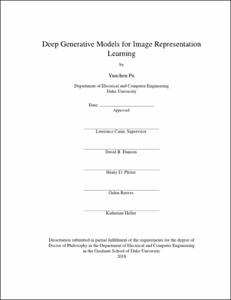 Recently there has been increasing interest in developing generative models of data, offering the promise of learning based on the often vast quantity of unlabeled data. With such learning, one typically seeks to build rich, hierarchical probabilistic models that are able to

fit to the distribution of complex real data, and are also capable of realistic data synthesis. In this dissertation, novel models and learning algorithms are proposed for deep generative models.

The first part developed a deep generative model joint analysis of images and associated labels or captions. The model is efficiently learned using variational autoencoder. A multilayered (deep) convolutional dictionary representation is employed as a decoder of the

latent image features. Stochastic unpooling is employed to link consecutive layers in the image model, yielding top-down image generation. A deep Convolutional Neural Network (CNN) is used as an image encoder; the CNN is used to approximate a distribution for the latent DGDN features/code. The latent code is also linked to generative models for labels (Bayesian support vector machine) or captions (recurrent neural network). When predicting a label/caption for a new image at test, averaging is performed across the distribution of latent codes; this is computationally efficient as a consequence of the learned CNN-based encoder. Since the framework is capable of modeling the image in the presence/absence of associated labels/captions, a new semi-supervised setting is manifested for CNN learning with images; the framework even allows unsupervised CNN learning, based on images alone. Excellent results are obtained on several benchmark datasets, including ImageNet, demonstrating that the proposed model achieves results that are highly competitive with similarly sized convolutional neural networks.

The second part developed a new method for learning variational autoencoders (VAEs), based on Stein variational gradient descent. A key advantage of this approach is that one need not make parametric assumptions about the form of the encoder distribution. Performance is further enhanced by integrating the proposed encoder with importance sampling. Excellent performance is demonstrated across multiple unsupervised and semi-supervised problems, including semi-supervised analysis of the ImageNet data, demonstrating the scalability of the model to large datasets.

The third part developed a new form of variational autoencoder, in which the joint distribution of data and codes is considered in two (symmetric) forms: (i) from observed data fed through the encoder to yield codes, and (ii) from latent codes drawn from a simple

prior and propagated through the decoder to manifest data. Lower bounds are learned for marginal log-likelihood fits observed data and latent codes. When learning with the variational bound, one seeks to minimize the symmetric Kullback-Leibler divergence of

joint density functions from (i) and (ii), while simultaneously seeking to maximize the two marginal log-likelihoods. To facilitate learning, a new form of adversarial training is developed. An extensive set of experiments is performed, in which we demonstrate state-of-the-art data reconstruction and generation on several image benchmark datasets.