The Glucocorticoid-Mediated Dynamics of Genome Architecture 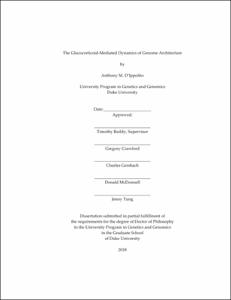 Human cells are perpetually receiving and responding to a variety of intrinsic and extrinsic signals. A primary mechanism by which cells carry out these responses is via changes in the regulation of gene expression. Many studies have examined gene regulation in steady state systems, but few have investigated the genomic response to stimuli. Therefore, it is less well understood how cellular stimuli elicit dynamic gene expression responses. Here, we investigate how extracellular stimuli mediate gene expression responses via: 1) Changes in transcription factor configurations at enhancer elements; and 2) Changes in chromatin looping between putative enhancers and their target gene promoters. To study these phenomena, we used glucocorticoid (GC) treatment as a model transcriptional stimulus. This hormone steroid is known to bind to and activate the GC receptor (GR), a ligand-induced transcription factor (TF), and is therefore a highly tractable system for studying stimulus responsive gene regulation. Using this model system, we first used high-resolution TF-binding site mapping approaches to elucidate the genomic binding locations of GR and its associated cofactors. Using these approaches, we found evidence that: 1) The GR binds to the genome as both a monomer and dimer; and 2) The GR binds to the genome with AP-1 in a more relaxed configuration, while it binds FOXA1 in a more constrained configuration. We next interrogated the role of chromatin looping in mediating dynamic transcriptional responses. For this work we used high-throughput genomics methods to assay chromatin conformation across a time course of GC treatment. These studies resulted in several main findings: 1) Chromatin loops do not form in response to stimulus, but are instead pre-formed before GC treatment; 2) Chromatin looping interactions increase between distal GR binding sites and GC-responsive genes; 3) The insulator protein CTCF is depleted at stimulus responsive looping interactions; and 4) GC treatment mediates changes in higher-order chromosome compartmentalization that are concordant with gene expression responses. Together these results provide evidence for a genome topology that is pre-wired to respond to stimulus, and that subsequent transcriptional responses are mediated through GR binding to putative enhancer elements with other TFs, in a variety of genomic binding configurations.