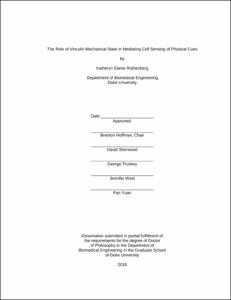 The extracellular environment affects tissue structure and is a source of physical cues to guide cell behavior. The sensing and interpretation of physical cues is important in many physiological processes, such as tissue organization and cell differentiation in development. Additionally, the misregulation or misinterpretation of physical cues is implicated in a variety of disease states that are currently lacking in effective treatments, including cancer metastasis and vascular disease. The process by which cells sense and respond to the physical nature of their environment is termed mechanotransduction and is mediated by molecular-scale protein-protein interactions that enable transmission of forces between the extracellular- and intracellular-environment for subsequent interpretation. Progress in understanding the molecular mechanisms important in mechanotransduction has been hindered by the lack of tools and analyses specifically designed for measuring the mechanical state of proteins within mechanosensitive structures in living cells. To address this issue, the goals of this dissertation were to: 1) create novel tools for measuring mechanical state of a protein, 2) investigate the role of protein mechanical state in mediating cellular response to physical cues.

We first aimed to create a technique for measuring force-sensitive protein dynamics within living cells, a property that had previously only been accessible in a purified, in vitro, system that does not properly mimic the cellular context. We chose to work with the mechanical linker protein vinculin, which is implicated in transducing forces at the site of cell-extracellular matrix (ECM) interactions, termed focal adhesions (FAs). By combining a Förster Resonance Energy Transfer (FRET)-based sensor to measure forces across vinculin with Fluorescence Recover After Photobleaching (FRAP) to measure vinculin dynamics, we were able to directly probe vinculin force-sensitive dynamics at FAs in living cells for the first time. The results allowed us to discover three distinct vinculin states: a force-stabilized state, a force-destabilized state, and a force-insensitive state. These states depend on cytoskeletal regulation and the ability of vinculin to bind critical binding partners. We found that the force-stabilized state of vinculin is required to concurrently stabilize FAs and cell protrusions. While the force-stabilized state and force-destabilized state can both mediate 2D random migration, when cells are presented with a physical gradient of ECM across a 3D pore, only the vinculin force-stabilized state is permissive for cells to successfully migrate in response to the physical cue.

To investigate the role of vinculin in sensing a different physical cue, we chose to confine cells to micropatterns of the same area but different shape and probe the effect on vinculin mechanical state. We again used cells expressing the FRET-based vinculin tension sensor (VinTS), as well as a force-insensitive control (VinTL), to measure the spatial regulation of vinculin loading in response to cell shape. It was shown that cell confinement leads to a gradient in vinculin load, with high tension at the edges and corners of cells, and a novel state at the center of cells that was potentially consistent with previous observations of compressive forces in this region. The incidence of vinculin compression was increased with increased aspect ratio of patterns, meant to induce higher contractility states. Additionally, different forms of cytoskeletal inhibition led to distinct modulations of the spatial distribution of vinculin load, suggesting different mechanisms for regulating vinculin tension and compression. We concluded that confining cells to micropatterns led to actin organization above the nucleus, resulting in compression of the nucleus, which was transferred to the FAs below, generating a spatial gradient of vinculin loading.

In continuing to study the role of the mechanically distinct FAs in the center of confined cells in mechanotransduction, we chose to focus on the biophysical and biochemical regulation, structure, and composition of confinement-induced central FAs. First, we determined that the uniqueness of this state was at least partially due to dimerization or clustering of vinculin at central FAs, suggesting a different structural organization from peripheral FAs. We used different degrees of confinement to show that increased confinement leads to increased incidence of central FAs, but we were unable to induce the formation of these FAs through cytoskeletal manipulation in the absence of physical cues. To understand how these central FAs might be uniquely regulating cell response to confinement, we identified a protein only recently discovered to localize to FAs that is enriched in our central FAs, called KANK2. Through knockdown of KANK2, we found that KANK2 regulates vinculin expression and localization and is required for the formation of central FAs. We concluded that the interaction of KANK2 with key FA proteins, including vinculin, regulates cell sensing and response to physical confinement, suggesting an independent pathway from the regulation of the highly studied peripheral FAs. Determining if this novel pathway can be used to affect cell behavior is an interesting future application of this work.

In summary, this dissertation describes novel tools for studying mechanical states of proteins within living cells and demonstrates the importance of protein mechanical state in mediating cell response to physical cues, using the FA mechanical linker protein vinculin as a prototypical example. We find that vinculin is a critical molecular player in allowing cells to sense and respond to haptotactic cues and cell confinement. We expect that future work in studying cell response to other physical cues, for example substrate stiffness, or in different subcellular structures such as adherens junctions (AJs) will continue to implicate vinculin as having an important role in mechanotransduction. Additionally, we believe that the new tools, assays, and analyses that we have developed will contribute to the study of molecular mechanisms necessary for mechanotransduction in different proteins, subcellular structures, and cellular contexts. Understanding how cells sense and respond to physical cues in guiding cell behavior will aid in the creation of therapies for mechanosensitive disease states as well as provide means for controlling cell behavior for tissue engineering or regenerative applications.