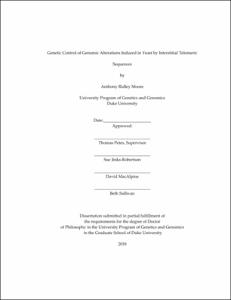 Telomeric sequences are often located internally on the chromosome in addition to their usual positions at the ends of the chromosome. These internally-located telomeric sequences have been termed “interstitial telomeric sequences” (ITSs). In humans, ITSs are non-randomly associated with translocation breakpoints in tumor cells and with chromosome fragile sites (regions of the chromosome that break in response to perturbed DNA replication). We previously showed that ITSs in yeast stimulated point mutations in DNA sequences adjacent to the ITS as well as several types of chromosomal rearrangements. The major class of these rearrangements was the terminal inversion, which inverted the chromosome segment between the ITS and the “true” chromosome telomere. In the current study, we examined the genetic control of these events. We show that the terminal inversions likely occur by the formation of a double-stranded DNA break within the ITS, followed by repair of the break utilizing the single-strand annealing pathway. The point mutations induced by the ITS require the error-prone DNA polymerase zeta. Unlike the terminal inversions, these events are not initiated by a double-stranded DNA break, but likely result from error-prone repair of a single-stranded DNA gap or recruitment of DNA polymerase zeta in the absence of DNA damage.