Looking Through the Shades: The Effect of Skin Color by Region of Birth and Race for Immigrants to the USA 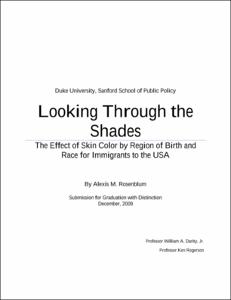 View / Download
1.6 Mb
Date
Author
Rosenblum, Alexis
Repository Usage Stats
598
views
577
downloads
Abstract
This project examines skin shade discrimination by region of birth and by race within the labor market for new immigrants to the US by analyzing data from Princeton University’s New Immigrant Survey (NIS). In contrast to findings from a previous study written by Joni Hersch, a subsample regression analysis by region of birth and race demonstrates that skin shade discrimination—a negative effect of skin shade on hourly wage when controlling for all other salient factors including race and ethnicity—is only present for those immigrants born in Latin America and the Caribbean. The regression model predicts that the darkest Latin American and Caribbean immigrants have hourly wages which are between 13% and 17% lower than the lightest Latin American and Caribbean immigrants. This is in stark contrast to Hersch’s work which concludes that all immigrants in the NIS sample face skin shade discrimination.
Description
Sanford School of Public Policy Honor's Thesis.
Type
Honors thesis
Department
Public Policy Studies
Subject
colorism
immigration
skin color discrimination
New Immigrant Survey
Permalink
https://hdl.handle.net/10161/1684
Citation
Rosenblum, Alexis (2009). Looking Through the Shades: The Effect of Skin Color by Region of Birth and Race for Immigrants to the USA. Honors thesis, Duke University. Retrieved from https://hdl.handle.net/10161/1684.
Collections
More Info
Show full item record