Essays on Drug Development and Marketing 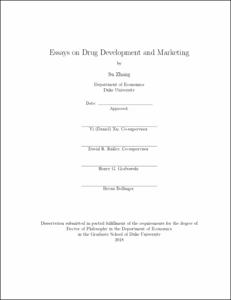 The first chapter studies how pharmaceutical companies make marketing strategies. It is well known that drug manufacturers invest heavily in advertising prescription drugs, but little is known about synergies between different advertising types. Furthermore, little is known about how patients and physicians respond differentially to advertising. Estimating causal relationship is challenging because advertising is not randomly assigned. Because the segmentation of television and radio markets are discrete and exogenous, comparing advertising efforts and demand across borders helps identify causal effects. Using data from 2008-2009 on anti-cholesterol markets and the border strategy, I find that a 10% increase in direct-to-consumer advertising per capita induces 0.3%-0.4% more detailing visits or 1% more detailing time for a given product in a given market. By further constructing and estimating a demand model that separately models physicians' and patients' decisions, I find that advertising to consumers induces more doctor visits. In addition, conditioning on visiting a doctor, advertising to consumers increases the number of requests for the advertised brand from patients with private insurance plans. Finally, after controlling for the patient request, direct-to-physician advertising increases the number of prescriptions for the promoted product.

How do governments respond to other governments when providing a global public good? Using data from 2007-2014 on medical research funding for infectious and parasitic diseases, we examine how governments and foundations in 41 countries respond to funding changes by the US government (which accounts for half of the funding for these diseases). Because funding across governments might be positively correlated due to unobserved drivers they have in common, we use variation in the representation of research-intensive universities on US Congressional appropriations committees as an instrument for US funding. We find that a 10 percent increase in US government funding for a disease is associated with a 2 to 3 percent reduction in funding for that disease by another government in the following year.

Companies increasingly engage in corporate social initiatives, but little is known about who cares and why. We measure corporate social initiatives as developing drugs for neglected diseases endemic in poor countries and charging low prices for all drugs (including heart disease and diabetes) for people in poor countries. These activities are costly, unlikely to be directly profitable, and can help millions of people. We find that companies most amenable to social initiatives are those with connections to the patients or the disease areas. We find that a company develops more treatments for neglected diseases if its headquarters is in a country with former colonies where the diseases create the largest burden. For example, Belgium, Britain, and France have former colonies in which diseases of poverty are prevalent, and companies based in Belgium, Britain, and France conduct more clinical trials for those diseases. Furthermore, companies based in countries with stronger colonial ties charge lower prices for all of their drugs in developing countries, including drugs for heart disease and diabetes. Finally, we show that these initiatives are unprofitable, unlike other forms of corporate social responsibility, such as environmental efforts, that can reduce costs and improve efficiency.