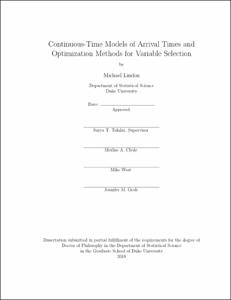 This thesis naturally divides itself into two sections. The first two chapters concern

the development of Bayesian semi-parametric models for arrival times. Chapter 2

considers Bayesian inference for a Gaussian process modulated temporal inhomogeneous Poisson point process, made challenging by an intractable likelihood. The intractable likelihood is circumvented by two novel data augmentation strategies which result in Gaussian measurements of the Gaussian process, connecting the model with a larger literature on modelling time-dependent functions from Bayesian non-parametric regression to time series. A scalable state-space representation of the Matern Gaussian process in 1 dimension is used to provide access to linear time filtering algorithms for performing inference. An MCMC algorithm based on Gibbs sampling with slice-sampling steps is provided and illustrated on simulated and real datasets. The MCMC algorithm exhibits excellent mixing and scalability.

Chapter 3 builds on the previous model to detect specific signals in temporal point patterns arising in neuroscience. The firing of a neuron over time in response to an external stimulus generates a temporal point pattern or ``spike train''. Of special interest is how neurons encode information from dual simultaneous external stimuli. Among many hypotheses is the presence multiplexing - interleaving periods of firing as it would for each individual stimulus in isolation. Statistical models are developed to quantify evidence for a variety of experimental hypotheses. Each experimental hypothesis translates to a particular form of intensity function for the dual stimuli trials. The dual stimuli intensity is modelled as a dynamic superposition of single stimulus intensities, defined by a time-dependent weight function that is modelled non-parametrically as a transformed Gaussian process. Experiments on simulated data demonstrate that the model is able to learn the weight function very well, but other model parameters which have meaningful physical interpretations less well.

Chapters 4 and 5 concern mathematical optimization and theoretical properties of Bayesian models for variable selection. Such optimizations are challenging due to non-convexity, non-smoothness and discontinuity of the objective. Chapter 4 presents advances in continuous optimization algorithms based on relating mathematical and statistical approaches defined in connection with several iterative algorithms for penalized linear

regression. I demonstrate the equivalence of parameter mappings using EM under

model-based approaches are equivalent to algorithmic derivation via proximal

gradient methods. This provides new perspectives on model-based and algorithmic

approaches, connects across several research themes in optimization and statistics,

and provides access, beyond EM, to relevant theory from the proximal gradient

Chapter 5 presents a modern and technologically up-to-date approach to discrete optimization for variable selection models through their formulation as mixed integer programming models. Mixed integer quadratic and quadratically constrained programs are developed for the point-mass-Laplace and g-prior. Combined with warm-starts and optimality-based bounds tightening procedures provided by the heuristics of the previous chapter, the MIQP model developed for the point-mass-Laplace prior converges to global optimality in a matter of seconds for moderately sized real datasets. The obtained estimator is demonstrated to possess superior predictive performance over that obtained by cross-validated lasso in a number of real datasets. The MIQCP model for the g-prior struggles to match the performance of the former and highlights the fact that the performance of the mixed integer solver depends critically on the ability of the prior to rapidly concentrate posterior mass on good models.