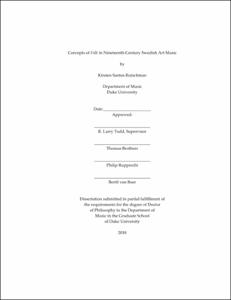 Art music and folk music are all too often perceived as opposing concepts. The educated, elite practitioners of a notated art seem to have little in common with musically illiterate commoners who weave an oral tradition. However, these two modes have much to say to each other when brought together in dialogue. This dissertation traces the use of Swedish folk themes in nineteenth-century art music—the era of a widespread interest in folk culture that quickly enthralled much of Europe, thanks to Johann Gottfried von Herder’s many disciples such as the Brothers Grimm—and provides a framework through which to understand the musical expression of a culture that has thus far been rendered largely invisible to non-Swedish-speaking scholars.

Though Sweden’s modern sovereignty dates back to 1523, the kingdom’s boundaries shifted dramatically early in the 1800s, as the eastern territory of Finland was lost to Russia in 1809 and the western land of Norway became linked with Sweden via union in 1814. Correspondingly, the question of what it meant to be “Swedish” demanded reevaluation. One response was to transcribe, edit, and publish collections of traditional songs and instrumental tunes as supposed treasure troves of cultural history. These arrangements, which were filtered through musical notation and given newly composed harmonic accompaniments, say more about educated perceptions of folk music and expectations of acceptable performance than they do about actual folk performance practices. Through the medium of print, these “cleaned-up” songs found wide circulation in print and formed the basis for many later compositions. I take a genre-based approach and analyze stages of development of the use of folk melodies in piano-vocal arrangements, male choral settings, theatrical works, piano literature, and chamber and orchestral music.

The political scientist Benedict Anderson writes of “imagined communities,” in which people who never meet nevertheless imagine themselves as part of a single group due to a deep sense of innate comradeship. I argue that, in Sweden, shared knowledge of the most popular traditional songs, and the recognition of the use of these songs in other compositions, helped facilitate the “re-imagination” of the Swedish nation-community during a time when cultural and political allegiances were in flux.

Similar phenomena have been widely observed with respect to other European countries, but Swedish music has not yet been studied in equal depth, likely because there was no figurehead composer of national and international prominence. To date, no systematic investigation of compositions based on Swedish folksong has been carried out. This dissertation draws on extensive research of little-known archival sources, including manuscript and rare published scores, letters, and contemporary newspaper reviews. In addition, it contributes to the field by entering into dialogue with existing Swedish-language scholarship, which has hitherto been inaccessible to most scholars outside Scandinavia. With this dissertation, I join a scholarly community spanning both sides of the Atlantic.