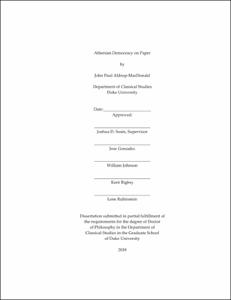 Thousands of public records survive from democratic Athens. Nearly all of them are inscribed on stone (or more rarely metal). A century and more of study has revealed that these inscriptions were the tip of the iceberg. Beyond them was an apparatus of public records, kept on perishable media, that were central to the administration of the city. Call it the paperwork of democracy. What remains to be reconstructed are the processes by which this paperwork was created and the significance of those processes for our understanding of democracy. This dissertation examines the paperwork of making decrees, the basic legislative document in Athens, using literature, court speeches, and inscribed decrees to reconstruct the process by which decrees were written and reused in city politics. It argues that paperwork was done in the central institution of democracy, the assembly; that the orators better known in their capacity as masters of speech were also masters of the rules and discourses of decree-making; that in foreign policy these orators and their audience, the masses, brought the same rigor to documentary texts that they brought to giving and hearing speeches. In sum, where earlier researchers have assumed that paperwork had nothing to do with democracy, this dissertation shows that Athenians were as clever with paperwork as they were with oratory.