Geographies of Freedom: Black Women's Mobility and the Making of the Western River World, 1814-1865 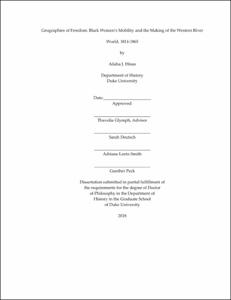 Geographies of Freedom explores the ways in which free and enslaved black women pursued freedom for themselves and their families in the middle Mississippi River Valley using the law and uniquely gendered access to forms of labor, mobility, and the special configurations of the region. The river-centric economy and the fluid mobility of goods, people, and ideas across state borders there begs the study of the region expanding out from the confluence of the western rivers as a unique site to explore questions of mobility, geography, slavery, and freedom.

My dissertation argues that black women actively navigated the roiling world of the antebellum middle Mississippi River Valley-a region that offers an unparalleled opportunity to understand some of the most historically significant cultural, political, and economic shifts of the nineteenth century anew. The black women I discuss lived in a world being transformed by an increasingly market driven economy and attendant reconstructions of labor organization. At the same time, the demographic landscape was shifting, new industries and public social spaces emerged, and the conflict over the political geography of slavery and freedom heightened. Amidst the chaos, black women found access to mobility, economic opportunity, and even the law, which they used to pursue freedom. From court records, slave testimonies, newspapers, government records, manuscript collections and contemporary popular literature, I extract narratives of black women as migrants, laborers, litigants, and agents of their own lives in a border region perpetually in the process of making itself.

By running away, suing for their freedom or that of their children, and achieving economic stability, black women embodied the very promise of capitalism and democracy that most white men flocked to the river valley to pursue. In doing so, they threatened hardening notions of gender inequality and racial control. My dissertation shows that as they continued to act in these self-determined ways, black women fueled an accelerating political conflict over race and slavery in the border region leading up the Civil War. They challenged slave holders' claims to their bodies, their labor, and their children, and they forced judges and attorneys in the region to reevaluate laws around slavery, freedom, and property. In the aftermath of the Civil War, black women retained these methods of strategically appealing to the law and using their mobility and extended networks of communication to organize and maintain control over their lives.